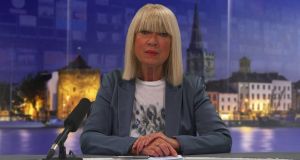 There are things RTÉ does well and things RTÉ does badly. And then there is RTÉ trying to do comedy. So there are reasonable grounds for worrying that a chucklesome telethon bang in the middle of a pandemic will be an exercise in pulling nails.

But after a stuttering beginning, RTÉ Does Comic Relief (RTÉ One, Friday) finds its stride and rises to the occasion. It is often hilarious, with its heart at all times in the right place, and ultimately raises €5,071,701 for charitable causes. It turns out that sometimes we actually can have nice things.

True, it’s all slightly ramshackle at moments (early on especially) and one or two of the faces on screen seem to have been bussed in from the National Wax Museum. But the funny bits are actually, genuinely, pinch-me-this-happening amusing. RTÉ has a go at comedy – and it isn’t terrible? This truly is the new normal.

RTÉ Does Comic Relief really all comes together about 60 minutes in to the four-hour-plus broadcast, as Zig and Zag get the band back to together for a fresh helping of The Den with Ray D’Arcy. There’s a flying panda and Dustin telling Bob Geldof to take a shower. Geldof does not get the joke, which is as you would wish it to be.

It’s funny how three anarchic puppets from the 1990s and one scowling Geldof can so completely change the atmosphere. As these totems of vintage kids’ telly run amok it is as if everyone at Montrose has given themselves permission to relax.

The big coup is having Paul Mescal and Daisy Edgar-Jones reprise their turns as Tubbercurry true loves Connell and Marianne in a jokey new instalment of Normal People. Connell is taking confession and – plot twist – the padre is “Hot Priest” from Fleabag Andrew Scott (a character every Irish person will have long ago clocked as wildly fantastical).

Marianne, as it happens, is confessing her sins too, while pointing out that the Church is “a patriarchal organ of repression”. And then Hot Priest starts singing Boyzone’s version of Tracy Chapman’s Baby Can I Hold You.

Is it funny? Well, it’s peculiar, but well acted. And it transpires that Normal People-meets-Fleabag is the Avengers-style crossover the internet didn’t know it needed but is very much up for. They’re certainly all hot and bothered about it in the studio, where Deirdre O’Kane, Jennifer Zamparelli, Nicky Byrne, Baz Ashmawy, Eoin McDermott and Eoin McDermott’s Satanic Waistcoat are our companions through the evening.

One clever decision is to involve comics from outside RTÉ. Anne Doyle presents a TV version of satirical news-site Waterford Whispers, delivering several rude lines with the straightest face on television. Clearly this needs to be a full-time series.

Saoirse Ronan later teams up with the cast of Derry Girls for a funny(ish) piece over Zoom. The 2 Johnnies for their part, rope in Marty Morrissey and Des Cahill for a Westlife skit.

And then Dara Ó Briain is joined by British comedy pals such as David Mitchell and Romesh Ranganathan for a faux Prime Time Investigates about the fate of mid-2000s chat-fest The Panel. “It was watching The Panel,” say internet chortle trio Foil, Arms and Hog, “that made us realise the future of comedy ... was off RTÉ”. Everybody stop and look – RTÉ is laughing at itself.

It isn’t all guffaws. Earlier in the evening heartstrings are plucked with by an animation of a young girl saying goodbye to her grandad at the start of lockdown, accompanied by a recording of Christy Moore’s The Voyage.

Could it have been slicker? Obviously. But with €5 million raised and giggles served by the gallon, RTÉ Does Comic Relief in the end proves that even in dark days, laughter finds a way through.