Fisher’s final acting role was in Horgan’s TV show, ‘Catastrophe’. The night before the Hollywood legend returned to LA, they went for dinner. Here, Horgan recalls that evening, and their friendship

‘I want everyone to remember her and all the great things she was.’ Sharon Horgan with Carrie Fisher in April 2016 in New York City. Photograph: Robin Marchant/Getty Images

It’s hard to write a love letter to someone who was allergic to bullshit. I keep reminding myself that she would have laughed in my face. That’s enough of a reason to keep this saccharine-free.

Rob Delaney and I were desperate to get Carrie in our show. Even three series in, we could still barely believe it. To begin with, we treated her like everyone else did: as an icon, not a real human. Which is why, I think, it took a while to become pals. And because she mostly turned down my invitations, with charming, poetic and hilarious texts. Sometimes she was tired; sometimes it was just not the right night for her. I invited her to a dinner where I thought (knew) she would like the other guests and they would (of course) like her. She messaged to say that she wasn’t in the right frame of mind for new people, that she would be better off with people who already knew her madness, so she could relax and be as crazy as she fancied. She turned down the invitation, but she made me promise never to stop asking. And I didn’t.

When she came to my house in Hackney, we sat on a sofa with our dogs and talked about everything. Mainly her life. She talked about herself a lot, thankfully, because it was always, always entertaining and wise and scattershot and full of quips and quotes with a dash of subliminal therapy. But her life was complicated. There was pain there, and responsibility, and her own demons. It added up to a head full of aggravation, as well as incredible anecdotes. I asked her when she ever got to have a moment of normal. She pointed at me and then back at herself on the sofa and said: “Doing this.”

The night before she got her flight back to Los Angeles, we had dinner. It was the day after our last day’s filming of Catastrophe and I was monstrously hungover and tired and incapable. Itried to cry off and she reminded me that she had dragged her ass all the way out to Hackney to see me the week before and I should return the favour. So I did. Thank the dark lord, I did. 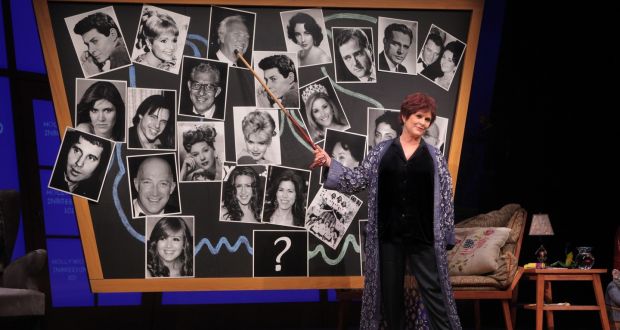 A life in pictures

Her good, long-term pal Salman Rushdie was there, too. I had used him as my first reason not to join. “I’m not feeling smart enough to talk to him.” Her response was: “Are you kidding? He’s just gonna talk about girls.” So we met and chatted and laughed and Gary (her dog) farted while Carrie handed out presents (me, an antique cocktail stick holder; Salman, a pair of chocolate tits). When he popped to the loo, Carrie said: “See? Isn’t he fun? Do you like him?” Of course I did. But what I liked more was that she cared enough to make sure I was having fun. And that was her wont. If she felt that she was talking about herself too much, she would say: “Wait! What about you? We haven’t talked about you.”

But who would want to do anything but listen to a lady like her with a life like that? It was, as she described it, something of a soap opera. She was no ordinary celebrity. She was, she said, Mickey Mouse. Everybody owned a piece, or felt they had the right to a piece. But the beautiful truth about Carrie is that she was genuine. She knew her talents, she knew her cultural importance, but she was humble, too. She didn’t have to feign her modesty. Her modesty and insecurity were part of her makeup. She was so real that it was almost dangerous. Actually, it was dangerous. Because she didn’t play the game. She said what she thought and, in an industry where that’s not always welcome, it sometimes came back to bite her. But she couldn’t help herself. She had very little filter.

My God, girls, we owe her a lot. Not many women of her generation called out the double standards of the film industry the way she did. And how it treats women of a certain age. She knew that a man in her position wouldn’t have got the flack that she got. And he didn’t. She knew that she had to keep mouthing off about it. And she did it with great wit. But it hurt her. Make no mistake about that. She was very aware of what people thought and said. And I didn’t like that she felt so hurt by it, and I didn’t like that she criticised her own looks so much. But it’s hard not to, when the world is telling you that you’re not allowed to age like a regular human.

When she was going up to her room after dinner, she was mocking herself for her slow pace, her “old lady body”. She looked back at me and said: “If I’d have known back then that I had something worth looking at, I’d have looked after it better. I was in good shape.” Then she passed a hallway mirror and took a quick glance. “But I’m not in such bad shape now.” I’m glad I got to hear her say that, a rare moment of uncritical self-love.

Carrie Fisher isn’t around anymore. And that’s just horrible. As my dad said: shit happens, but some shit is worse than others. And I want everyone to remember her and all the great things she was. A wonderful writer, a fine actress, a great mother, a caring daughter, a loyal friend, a wit, a prolific present giver, a lunatic, a legend.

Richard Mosse: ‘The idea of the artist going it alone is bogus’