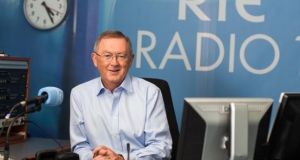 Sean O’Rourke said he had been in the chair for almost seven years adding “I have had an absolute blast”.

Broadcaster Sean O’Rourke is to retire from his mid-morning RTÉ Radio One show on May 8th.

“For nearly seven years now it’s been my great privilege to sit in the best current affairs chair in Irish broadcasting. But nothing is forever,” the 64-year-old said at the end of the Today with Sean O’Rourke programme on Tuesday.

“I’m going to be 65 in May. And that’ll be as good a time as any to end the great adventure of Today SOR. I’ve had an absolute ball.”

O’Rourke, known for his formidable interviewing style, recalled his “memorable encounter” with Donald Trump in Doonbeg prior to him being elected US president, and “having the odd bit of hand-to-hand studio combat” with interviewees over the years as he made the announcement.

It is understood that this will not be the end of his work as a journalist.

A native of Portlaoise, O’Rourke began his career with the Connacht Tribune in 1973. He joined the Sunday Press in the late 1970s as a sports reporter and then moved to RTÉ in 1982. He worked as a political correspondent for the Irish Press from 1984 to 1989 before returning to RTÉ, where he took over hosting the News at One in 1995. He has also presented TV shows such as The Week In Politics.

His move into the station’s mid-morning flagship current affairs slot was announced in 2013 following the defection of Pat Kenny to Newstalk.

In 2011, O’Rourke was conferred with an honorary doctorate by NUI Galway and is an honorary Professor in the University’s School of Journalism.

“Sean has navigated and dissected the stories of the day with a rigour, tenacity, clarity and drive that is unmatched,” she said.

Tom McGuire, head of RTÉ Radio One, described O’Rourke as a “peerless journalist”.

“To coin one of his own phrases, his move from News at One to Today with Sean O’Rourke proved that not only could he play ‘senior hurling’ but senior football as well. A true dual star.”

President Michael D Higgins wrote to O’Rourke to congratulate him on his retirement. He told him that “over the years you have used your skills and insights to inform the people of Ireland on a wide diversity of issues” and that the news “will have filled RTÉ listeners with sadness as they will be missing your voice, as part of their morning, which is not to accuse you of having become an institution”.

O’Rourke’s departure from the airwaves will kick-start speculation as to who will succed him in the slot. Sarah McInerney is to host the show during the summer months.

‘Conor McGregor is an inspiration. There’s a severe vulnerability to him’
7