RTÉ is the place Irish comedy goes to die

The broadcaster tends towards mediocrity and self-satisfaction, not humour 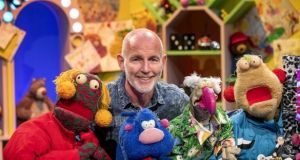 The Den gang have returned for new episodes. Photograph: RTÉ

The return of The Den to RTÉ and the start of Deirdre O’Kane’s new chat show for the same broadcaster are covered in this week’s TV reviews, but each in its own way reminds us of one of the fundamental truths of modern Irish cultural history: Montrose is where Irish comedy goes to die. Most of the time it’s been a quick strangulation at birth (a rejected pitch, an unreturned call). Occasionally it’s a facepalm who-thought-this-was-funny car crash. But more often it’s just a slightly woebegone, undercooked concept rendered worse by poor execution.

At this stage it might be better for all of us if RTÉ just put up large signs at its security gates advising comedians and comic writers to “turn back while you still can”, or, more productively: “Have you tried the BBC?”

Why is RTÉ’s record so grim? The problem stretches back decades, but doesn’t figure much in the histories or academic studies. Yet it does throw some revealing light, even for those of us who support the overall principle of public service broadcasting, on the particular shortcomings of the Irish version of it.

When it comes to its comedy history, RTÉ’s defenders point to the same old handful of examples – the Scrap Saturdays and Hall’s Pictorial Weeklies – but it’s the very scarcity of these creative successes over six long decades of television history that proves the point. Talk to most people in the comedy business who’ve dealt with RTÉ down the years and you’ll hear the same melancholy stories: dispiriting meetings with the bureaucratic blob; a deep-seated cultural cringe that seeks inspiration first from British shows; a fear of upsetting government; a discomfort with anything too anarchic.

It’s instructive to look at what actually makes it past the guard dogs at the gate: stale sitcoms that expire after a season or two; comedy dramas that are neither comedic nor dramatic. Even by RTÉ’s own lights, the record is underwhelming. When it reached into its vaults during lockdown to fill its schedules, the pearls it pulled out were Killinaskully and Bachelors Walk; each was a ratings success in its day, but neither exactly sets the pulse racing.

Meanwhile, embarrassingly, from Moone Boy to Derry Girls, Irish TV comedy on British channels has been having a great run. And the most damning indictment of the local commissioning process is the fact that actual successes have often happened when management was looking the other way. The two funniest Irish programmes of the 1990s, for example, The Den and Après Match, were produced under the auspices of the young people’s and sports departments respectively.

Put all these together, and you have an organisation that is running out of time and possibly out of ideas too

It remains to be seen whether the resuscitated Den can really find a niche for itself in the Ireland of the 2020s. And we wish Deirdre O’Kane well with her new show, although the format – two comedians guffawing at each other’s jokes – has the look, yet again, of something devised by people who don’t understand the mechanics and stagecraft of comedy. The world of chat and interview shows is already full of successful comedians-turned-hosts, but it took some peculiar sort of genius to decide that wasn’t enough, and that the guests also had to be comedians.

Beyond the not unimportant question of why Irish audiences aren’t getting the quality of locally produced comedy they deserve for their licence fee, does RTÉ’s underperformance in this particular area matter much? Well, it might help us to understand the shortcomings which have beset RTÉ over the years, some of which, in this moment of existential crisis, may drag it down completely if they’re not addressed.

The first of these is its natural inclination towards mediocrity instead of excellence. One truth about comedy is that it is very, very hard to do well. The audience is unforgiving. A 10-minute sketch is far more difficult to create and perform than a 10-minute interview with a politician. So a failure in comedy has a ring of empirical truth to it which you don’t necessarily get elsewhere.

The second is the self-satisfaction and insularity which seems so baked into the way RTÉ thinks about itself and how it presents itself to the world. This is not a culture open to having its own self-regard punctured.

Finally, there’s the broadcaster’s narrow, small-c conservatism about its core mission, which either undervalues “unserious” parts of that mission such as comedy, or worse, as a result of RTÉ’s dual funding structure, sees them as “commercial” rather than “public service”.

Put all these together, and you have an organisation that is running out of time and possibly out of ideas too. And that’s no laughing matter.