RTÉ has a serious stab at radio comedy

Apart from satirical shows such as Callan’s Kicks, comedy has been a bit ad hoc on RTÉ over the past 30 years. A new radio project aims to change that 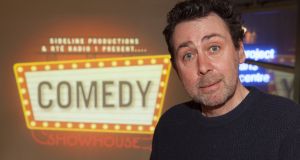 “I think RTÉ are being very brave with this,” says Don’t Quote Me presenter Sean Hughes 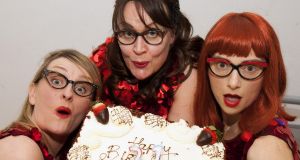 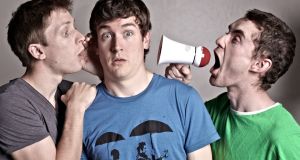 At first glance, Sean Hughes seems an odd choice to helm a radio project that aims to change how broadcast comedy is made in Ireland. After all, the London-born, Dublin-raised comedian effectively laid out the career path for an entire generation of Irish comics: leave Ireland and make your name on panel shows for British television. But Hughes’s latest role, as presenter of RTÉ Radio 1’s new series Don’t Quote Me, actually marks a return to the network. Back in the mid-1980s, he was a media student at the College of Marketing and Design in Dublin when RTÉ gave him an unexpected start in broadcast comedy.

“Weirdly, we went for a day trip to RTÉ as part of our course, and me and a mate impressed the guys there as a double act,” Hughes recalls. “So we ended up doing [the short-lived youth series] TV Gaga as a double act. I was 19, we were absolutely rubbish and we were doing live TV. That was a weird baptism of fire. And then I did [equally short-lived TV series] Megamix. I was a barman on that. So there’s form in that sense, and there were people there who were quite supportive of me. But back then, they weren’t really doing comedy in RTÉ. They didn’t really understand the concept.”

There’s a school of thought that little has changed in RTÉ, at least when it comes to radio comedy. Aside from a couple of high-profile satire shows – Scrap Saturday in the early 1990s, Callan’s Kicks in recent years – comedy has been a rare commodity on the public radio broadcaster over the past 30 years, with laughs equally scarce. But Hughes, along with a clutch of other Irish comic acts, is at the forefront of a new Saturday evening radio strand, Comedy Showhouse, which seeks to change how home-grown radio comedy is produced – and ideally be funny at the same time.

“I hate to say it, but in a way we’re semi-revolutionising the idea of what radio comedy in Ireland is,” says veteran producer Billy McGrath, who is behind the series. Made by McGrath’s company, Sideline Productions, in association with comedy website Grintage. The Comedy Showhouse hour is a six-week season that pairs Hughes’s show Don’t Quote Me – a quiz show in which panellists guess the provenance of quotes – with various standalone comic shows. All the shows were recorded in front of live audiences during a week-long run at Dublin’s Project Arts Centre in February.

Taken individually, few of these shows seem like game-changers. The one-off programmes have so far included performances by long-serving musical comedy trio The Nualas and sketch troupe Foil, Arms and Hog. Don’t Quote Me, meanwhile, is the kind of irreverent panel show familiar to anyone who previously saw Hughes during his six-year stint on the BBC TV series Never Mind the Buzzcocks.

Where the series does seek to break new ground is in its concentration of resources, its variety of genres and its aspiration to kick-start a more focused approach to producing comedy for Irish radio and even television. The roots of the series lie in Don’t Quote Me, which was devised by McGrath and Hughes and originally commissioned as a pilot in 2013.

“We discovered it was quite expensive for one half-hour,” says McGrath. “It’s all about economies of scale, as usual.” McGrath approached Ann-Marie Power, RTÉ Radio 1’s editor of music and entertainment, with the idea of organising a live comedy festival that would yield 18 half-hour shows. (Three of these have been broadcast as one-offs since February; two by comedian Colm O’Regan and another by satirical musician Paddy Cullivan. )

“We reduced costs by about 40 per cent,” says McGrath, “so this made it very attractive for RTÉ.”

In fact, the costs have been minimal for RTÉ: about 85 per cent of the funding was provided by grants from the Broadcasting Association of Ireland. But the project was pitched at a fortuitous time, when Power wanted to give comedy a greater presence on RTÉ Radio. She had given impressionist Oliver Callan a bigger on-air footprint, taking him from his short Nob Nation pieces on 2FM to his ongoing Radio 1 series Callan’s Kicks. She also commissioned sketch show Irish Pictorial Weekly, which then transferred to television.

But Power acknowledges that her commitment to comedy has been pursued in a slightly ad-hoc manner. “We didn’t sit down and have a big plan. [We’re] just sort of feeling our way along, but there is a strategy and there is support from my bosses,” she says. “The main thing is the appetite for comedy is there. Any research we’ve done shows people love it; they want a laugh; they want smart comedy.”

One of the notable aspects of Comedy Showhouse is the lack of the kind of satirical impressions practised by Callan and Today FM’s Mario Rosentock. Such mimicry has been the mainstay of Irish comedy since Dermot Morgan skewered the foibles of the Haughey era on Scrap Saturday, but McGrath feels that reflects a dearth of behind-the-scenes comedy expertise.

“If you don’t have a comedy department and there isn’t a certain skill set in a broadcaster, you’re obviously going to take the easy option,” says McGrath. “And the easy option is lampooning. I’m not being critical of RTÉ, but everyone knows it’s hard to develop an original voice or an original sitcom with a new script – there are so many ducks that need to be lined up.”

All of which leads to McGrath’s audacious hope of revolutionising Irish broadcast comedy. While there is an impressive number of Irish comic performers writing successful comedy for television, radio has proved more elusive. “If I watch an Irish comedy show, I will never a see a credit for script editor,” says McGrath. “But one of the things that BBC Radio 4 do is they put together teams and hone in on being able to craft a line, a joke, a scene.”

With Comedy Showhouse, McGrath hopes to sow “the seeds of a nursery” for comedy writers. While there are no comedy modules on any Irish third-level broadcasting courses, students from Ballyfermot College worked on the performance and post- production side of the series, to see how comedy is written. And for McGrath, radio is the best proving ground for such skills:

“Writing for radio, it’s quite naked. There’s nothing between you and the audience; you really have to nail it.”

What effect all this will have on the radio comedy landscape remains to be seen. In a way, Comedy Showhouse has already been a success: the BAI has awarded funding to make another 16 shows in 2017. Over at RTÉ, meanwhile, Power is commissioning one-off shows and non-broadcast comedy pilots in the hope of discovering new talent and finessing established comics.

As for the programmes themselves, they have so far been amusing, if not paradigm-shifting. (There’s no sitcom, for instance.) Panellists such as comedian Andrew Maxwell and writer Fiona Looney bring a Marmite quality to Don’t Quote Me, while Hughes is an enjoyably lugubrious and unpredictable presence.The fact that the shows were recorded in February means there is little topicality: Al Porter’s jokes about Lucinda Creighton sound a bit hollow since the Renua TD’s election defeat.

But block-taping the shows has advantages apart from the lower costs. When I saw the final two programmes being recorded in February, regular guests such as Maxwell and fellow comic Karl Spain had built up the kind of zingy relationship crucial for such a format. Hughes may want to subvert the quiz genre – “I think there’s too many panel shows” – but the programme works best when it hits a level that’s recognisably its own without being cosy. Hughes has a low opinion of many radio comedy executives in the UK – “I think the people in charge don’t have a lot of imagination” – but he’s happy with his Irish radio experiment. Well, almost.

“I think RTÉ are being very brave with this whole week of stuff,” Hughes says. “But it’s a shame it’s on in the evening. I think it has to be slightly earlier. When I wake up in the morning, I turn on the radio but then, later, I turn it off and watch the telly. So really these shows should be on at 7.30 in the morning.” A comedy programme replacing Morning Ireland? Now there’s a revolutionary idea.

Comedy Showhouse Hour, including Don’t Quote Me, is broadcast at 6pm on Saturday and runs on RTÉ Radio 1 until September 24th