RTÉ Does Comic Relief: Who, what, where, when and how

The charity telethon takes over RTÉ One on Friday night. Here’s what to expect 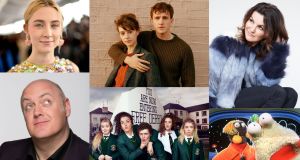 Darren Smith knew he was on to a good thing when he received a video message from Richard Curtis last week. The comedy writer, who helped found Comic Relief in the UK, had just seen the Normal People sketch that Element Pictures had submitted for RTÉ Does Comic Relief, tomorrow’s Irish version of his own British charity behemoth.

Directed by Lenny Abrahamson and starring Paul Mescal and Daisy Edgar-Jones in an altogether lighter version of their on-screen romance, the sketch prompted Curtis to joke to Smith, the producer of the Irish version, that he was furious with envy and delighted at their coup. “He said it was his favourite seven minutes of film material of all time and that he was thinking of sabotaging the whole night just so he could show it on UK Comic Relief next year,” says Smith.

Normal People aside, viewers can expect to encounter Derry Girls with an A-list twist, Roy Keane showing up in The Young Offenders, and Brian O’Driscoll and Amy Huberman doing lip-sync battle with Chris O’Dowd and Dawn O’Porter

An ungenerous sort might expect RTÉ to stage a paler version of the UK’s Comic Relief extravaganza, which is famed for putting big names in unlikely scenarios, such as David Beckham starring in Only Fools and Horses. Yet Curtis has plenty to be envious about. RTÉ’s first charity telethon in 13 years is not, in Smith’s words, “about throwing Twixes out to a load of people”.

Normal People aside, viewers can expect to encounter Derry Girls with an A-list twist, Roy Keane showing up in The Young Offenders, Brian O’Driscoll and Amy Huberman doing lip-sync battle with Chris O’Dowd and Dawn O’Porter, and a starry revival of The Panel starring Aisling Bea, David Mitchell and Jimmy Carr. Westlife are being “given away” as a prize.

Viewers can expect Dermot Bannon: The Opera, and Imelda May, Kodaline, Jerry Fish and Daniel O’Donnell have, somewhat improbably, ended up performing on a single song. Also in the considerably starry mix are Niall Horan, Bob Geldof, Aisling Bea, Andrew Scott, Saoirse Ronan and Hozier. Each will be doing something, in Smith’s words, “different, interesting or unlikely”.

All told, it’s poised to be a celebration of what makes us distinctly Irish, with a hefty side dish of nostalgia. “Oh, it’s Irish through and through, in the very best sense of that,” says Smith.

Ray D’Arcy, who will reunite with Zig, Zag and Dustin for a live revival of The Den, says, “I think the way people’s heads are right now, nostalgia is bigger than ever.” The idea of a reunion “sort of suggested itself”. “I suspect I’ll be doing what I mainly did for eight years: sit in the middle and laugh, and occasionally act like a responsible parent and tell someone, ‘You can’t say that.’”

RTÉ Does Comic Relief: Everything you need to know

For #RTEComicRelief @weemissbea has been writing jokes for @Hozier and once she finds a theme she really sticks to it.#RTEComicRelief - Friday at 8
You can donate at https://t.co/bTJtmB5OXq pic.twitter.com/TECabB6vcb

What should we look out for?
So far everyone is talking about the Normal People sketch written by Conor McPherson and directed by Lenny Abrahamson. Lisa McGee’s Derry Girls contribution is also one to watch. Pat Shortt will be joined by his daughter Faye for something that producers say is a highlight. And Deirdre O’Kane and her Moone Boy costar Peter McDonald will team up for a sketch called Older Normal People.

Which charities are benefitting?
RTÉ and Comic Relief’s partner for the event is the Community Foundation for Ireland, which works with more than 4,000 nonprofit organisations around the country. Charities will be able to apply to it for a share of the funds, which it will be distributing.

How can I donate?
One route is via heehee.ie. Presenters will be giving more details during the show about how to donate via text and phone

Smith, who has more than 30 years of TV experience, had wanted to get Comic Relief off the ground for years. Teaming up with Deirdre O’Kane, who had similar ambitions to raise money for charity, the pair pulled comedy extravaganzas together on St Patrick’s Day at 3Arena in Dublin in support of Comic Relief, raising €600,000 in the process. “I think we were always ambitious,” O’Kane says. “We started the live shows in the hope that if we build it, they will come.”

Last year Smith and O’Kane were in London together for a Sky launch, and took the opportunity to contact Emma Freud, Curtis’s partner, who also works with the charity. Next thing they knew they were sitting in the kitchen of the pair’s house in Notting Hill, in west London, discussing the idea of launching Comic Relief in Ireland. And, after the success of the UK’s Big Night In earlier this year, Smith and O’Kane were given the go-ahead by Comic Relief International to create an Irish version of the night.

“I don’t think any of us in January, especially RTÉ, thought we’d be doing a telethon in June,” Smith says. “After the Big Night In was so impactful, we started lobbying RTÉ again. To be fair it wasn’t a hard sell.”

From there, and with the help of a core committee of six – Smith, O’Kane, the talent agent Jane Russell, the advertising executive Patrick Hickey, the accountant Ciarán Medlar and the lawyer David Phelan – it was a question of O’Kane and Smith opening their Rolodexes. In some cases they roped in favours from celebrities who had agreed to take part.

“Look, I happened to know Ed” – Ed Guiney, of Element Pictures – “so getting that [Normal People sketch] was a piece of luck,” says O’Kane. “You can get on to someone like Steve Wall” – the musician, who also starred with O’Kane in Moone Boy – “and he’ll say, ‘Well, I know so-and-so.’

“I’ve been in the business for 30 years, and luckily I’ve managed not to tick to many people off,” she adds. “There are always people who will say no, and that’s okay. It’s not for everyone in the industry. But it’s really, really satisfying when we get the yeses.”

Smith says: “We’ve been blessed by the fact that talent is at home – they’re not making movies or shows, or on tour. The technology allows them to take part. The talent are also affected by the current situation – it’s a tough time if you depend on selling tickets for a living, or shooting drama. Some of the talent is wealthy and can weather this out, but not all of them. It’s not a case of some deluded millionaires telling the rest of us to cough up. To be fair, Dee is a brilliant hustler – she’s worked in theatre, movies, comedy and scripted TV, so she knows a lot of people.

Five weeks ago the team moved into production. “It was real shoulder-to-the-wheel time,” says Michael Hughes, the evening’s executive producer. “Normally events like this take months of preproduction, but, really, we had a matter of weeks.”

It’s the best crack I’ve ever had. We’re in serious danger of getting high on our own supply. I reckon that, by the time we’re halfway through, people will be looking for more

Pulling together an event of this size is one thing; doing it in a pandemic is another. Shooting in studios 4 and 5 at RTÉ – 4 is home to The Late Late Show – the producers will be adhering to social distancing and Covid-19 protocol on the night.

“It’s been possible to film some of the sketches using social distancing – with the camera you can cheat it a bit,” says Hughes.

“The studio will feel as sparse as the Late Late does, with no audience,” says Smith. Studio 5, the sports studio, will be the main hub, he explains, for O’Kane and her cohosts Jennifer Zamparelli, Nicky Byrne, Eoghan McDermott and Baz Ashmawy.

The prerecorded sketches are rolling into the production office, to everyone’s delight. “Honestly, it’s the best crack I’ve ever had,” Smith says. “We’re in serious danger of getting high on our own supply over here. My hope is that we are going to deliver. The Irish people can sometimes be a bit, ‘Ah, here, f**k’s sake, what are they doing?’ but I reckon that by the time we’re halfway through they’ll be looking for more.”

The Comic Relief team hope the funds raised for Irish charities will run not just into the many thousands but into the millions. “I don’t want it to be good, or even great. I want it to be fantastic,” says O’Kane. “My ambitions and RTÉ’s ambitions are different things, but I don’t want this to be a one-off. This is just the start of things.”

Smith says, “Charities are swamped at a time when we need them the most, and most of them haven’t been able to do their own fundraisers. We can’t have marathons or cake sales or any of those things. We in Ireland give ourselves a big clap on the back for being generous. Well, now’s the hour. Prove it.”

RTÉ Does Comic Relief begins at 8pm tomorrow on RTÉ One