Opinion: A State-funded broadcaster potentially acting to reduce competition should send a shiver down the spine 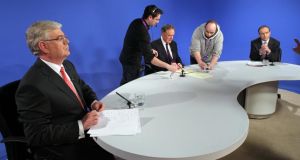 State dominance in television broadcasting ended in Europe and most of the western world about a decade ago. But in Ireland it clings on. How will the Government, as it considers the current five-year review of RTÉ, move Ireland into the modern media age?

Noel Curran, RTÉ’s energetic and able leader, hinted at a seachange in the station’s thinking last Friday in this newspaper. And I agree with his expressed views. RTÉ needs to be less commercial. Public service output requires stable funding. RTÉ’s costs must be cut.

But looking for signals of intent from RTÉ misses the point. Ireland made legal commitments to the European Commission in 2008, responding to a state aid complaint, that it would reform broadcasting in Ireland. Five years later and with little reform to date, Ireland is an outlier amongst its European peers.

Twice recently, independent regulators have noted that an apparently benign dominance by the State in broadcasting is, in fact, something worse. Last year the Competition Authority, in a rare enforcement decision, assessed that RTÉ had likely abused its dominance in the ad market. And just a couple of weeks ago ComReg, in a filing to the European Commission, said “a number of issues have arisen over the last number of years which appear to ComReg to suggest that, absent regulation, RTÉNL [the RTÉ-owned transmission network] and RTÉ may have the ability and incentive to engage in potential anti-competitive behaviours [in the broadcasting transmission markets]”.

A State-funded broadcaster potentially acting to reduce competition should send a shiver down the democratic spine. Athena Media wrote in a report for the Broadcasting Authority of Ireland in 2011 that “RTÉ is the dominant player in television with just 21 per cent of TV revenue going to the private sector. Only Austria . . . has a weaker commercial TV sector”; and more recently the leading UK media consultancy Oliver and Ohlbaum in a report for TV3 noted “it is the scale and scope of [RTÉ] that is crowding others out of the market”.

The core of this market failure is RTÉ’s outdated dual funding with licence fee and advertising. RTÉ stands alone among State-funded broadcasters in Europe in retaining a dominant share of the TV ad market (approximately 50 per cent in 2011). Public service broadcasters (PSBs) in the UK, Sweden and Denmark carry no advertising; and elsewhere PSBs’ share of advertising is between 12 and 24 per cent. Ad minutage for PSBs has been slashed in Germany, France and Spain.

Why? Because PSBs have a steady output requirement, the “public service remit”. A well-defined remit (news, current affairs, unique home-produced drama) requires steady funding, a world away from capricious adland. In contrast, commercial broadcasters thrive and survive on the ebb and flow of advertising.

The dual-funding model distorts the ad market. RTÉ sells advertising below the cost of its programming. Noel Curran has reduced costs but RTÉ still accumulated deficits of €100 million (after receiving nearly a €1 billion of licence fee funding) over the past five years.

Yes, the recession is to blame for a large part of the fall but not all of it. In 2011 ad prices in Ireland were at least 35 per cent below the European average (who can remember something being significantly cheaper in Ireland?). The same will happen with digital media if RTÉ continues to run up losses on online while commercial competitors (including newspaper sites) have to maintain financial discipline.

Yet commercial broadcasters also deliver a public service. Vincent Browne holds politics to account four nights a week on TV3, and each weekday there is prime-time news and a three-hour live breakfast programme. The increase in Irish output to 40 per cent of TV3’s schedule matters, as does TV3’s recent opening of one of the best HD studios in these islands. TV3 is happy to fund this all from advertising if it has fair access to a rational ad market.

Why does this matter? Plurality, or choice, is essential to our democratic values. We should worry when an RTÉ executive admits that the infamous Tweetgate on RTÉ “changed the outcome of . . . the presidential election”. (http://iti.ms/18p6NVr) RTÉ’s failure to report on the Competition Authority’s decision against it last year was also troubling (private companies know just how exercised RTÉ can become about shortcomings). And while its lack of coverage on the Lowry tapes might well be reasonable editorial judgment, that becomes a different matter if there is no other broadcaster to decide differently.

A less obvious shortfall might appear to be RTÉ’s boast that it broadcast “ten out of ten” of the top sports events last year. Yet sport is critical for commercial broadcasters to build audiences. In 2010 the BBC Trust committed to “doing fewer things better and leaving space for others by setting clearer boundaries”. It will cap BBC expenditure on acquired programming to 2.5p and sport to 9p in every licence fee pound to ensure “the BBC does not distort a market in which there is both considerable commercial and public value”. That is a properly defined remit in contrast to that of RTÉ (as Athena Media wryly put it “in a sense RTÉ defines everything it does as PSB”).

The Broadcasting Act 2009 explicitly saw its role to ensure the provision of “open and pluralistic broadcasting services” and “high quality, diverse and innovative programming by commercial . . . broadcasters”. The review is already a year late, so to meet these objectives now the Government must:
Remove RT

É from a dominant position in the ad market through substantially reducing its ad minutage and other advertising activity;
Ensure stable public funding for RT

É from a licence fee (or PSB charge as the Minister has proposed) which should be index-linked, both capping the real cost to citizens and maintaining funding for RTÉ in real terms;
B

an RTÉ from operating deficits.

In addition the BAI must define an explicit public service remit with a reduced scale and scope for RTÉ and TG4 (limiting TG4 to Irish-language programming would be a start).

An old sage once told me “regulation moves at glacial speed but commensurate force”. Is it too optimistic to see that force picking up pace? Noel Curran’s comments last week were prescient, and the BAI under Bob Collins’s chairmanship seems to recognise the policy imperatives. It is up to Minister for Communications Pat Rabbitte and the Government now to deliver on Ireland’s commitments . . . fully and without further delay.