Rose of Tralee: Daithí Ó Sé is as sturdy as an oak as host, and as quick as one on his feet

TV review: On day two of the festival the host seemed to be closest to wilting. That was before he got his kinky boots on 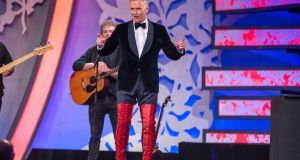 Daithí Ó Sé dons the kinky boots – all in the name of charity. Photograph: Domnick Walsh

When Sinead Rose Stayton alighted on a chosen career, in the New Zealand Police force, she was advised to delay application until she had gathered more life experience. Her dream has yet to be realised, but her life experience is entirely sufficient to be a finalist at the Rose of Tralee (RTÉ One, Tuesday, 8pm), even if she is not inclined to give it a hard sell.

Was her boyfriend, who she met while crashing his 18th birthday party, in a relationship at the time, host Daithí Ó Sé wants to know? No he wasn’t. “Well, that would have made a better story for this bit anyway,” responds Daithí, who, alone among the remaining Roses, tonight seems closest to wilting.

To be fair, Ó Sé seemed to be attempting some badinage, rather than sniping at the content, later so impressed by her extravagant, lubricious dance routine, he almost calls time on the competition (“Follow that!”). But while he is as sturdy as an oak as host, he is also about as quick as one on his feet. Hearing later from Donegal Rose, Chloe Kennedy, about the three-day wedding celebrations in her grandmother’s native India, he asks her how long they last. “Three days,” she repeats. Her father is mayor of Donegal Town, he notes; how did he get that job? Kennedy briefly outlines electoral politics for him. It’s been a long festival.

“They don’t care what they say, they have no filter,” enthuses Wexford Rose Emma Byrne, a teacher of primary school children, who herself seems a model of verbal insouciance. Spooling with anecdotes and spieling out zingers, she may have pushed Daithí a little too far. Her nickname, Emma Dilemma, stemmed from her tendency to allow stories “to blossom into something much bigger.” “Look what you blossomed into today,” Ó Sé interjected, more oblivious than intentionally patronising. “Nothing wrong with that, Emma Dilemma!” What can you say?

Impressive as the candidates are – qualified doctors, aspiring criminal profilers, high-flying business women, speech therapists who work with autistic children, survivors of cancer and voluntary charity workers – the Rose of Tralee tends to prefer the homespun, the sentimental and the folksy.

Like one Rose’s joke that the escorts tell them when go to bed, or the clear, beaming pride of their families in the audience, or the regular instalments of family heartbreak and grief among all the party pieces (much more restrained tonight over the lengthy three hours), its combination of lovely girls and light entertainment aches with the promise of simpler times. Or, to put it another way, it is the type of show that spends two days building up to the sight of Ó Sé in a pair of crotch-high red pleather fetish boots, donned as part of a dare for charity.

That makes it strange to hear that Donald Trump, the one-time pageant operator who managed to make even Miss Universe seem grubbier, and who has since done something similar to the US presidency, should take such an interest in this toothsome competition. But, according to Trump Doonbeg employee and Rose of Clare Victoria O’Connell, Trump “was very intrigued about the Rose of Tralee, he asked a lot of questions about it”.  So long as he didn’t try to grab it.

In the end though there can be only one Rose, and this year the title goes to Limerick Rose, Sinéad Flanagan, whom Daithí’s earlier commanded to “Follow that!” after the New Zealand Rose’s scorching dance.

How did Flanagan distinguish herself? Without the benefit of a party piece to draw from, it’s hard to recall, exactly, unless you found the physiotherapist-turned-doctor’s enthusiasm for microbiology and infectious diseases particularly contagious. “I suppose it’s just an interesting area,” she nodded, as agreeable and pleasant as the candidate for a job interview, before relating her experience of charity work in Ghana, then admitting to some difficulty telling her left from right.

The Rose of Tralee appreciates that balance of accomplishment and self-deprecation, the well-attained and defiantly basic, where a woman may talk about her achievements, just not so loud, twinkle benignly for the camera, but not threaten to outshine the host, be displayed as pretty as a flower, but never bare any thorns.