Rose of Tralee: Dáithí Ó Sé looked like a man briefly encased in a giant condom

TV review: It’s the 60th anniversary of the pageant, but it seems older, eternal even. At least watching the first show felt that way 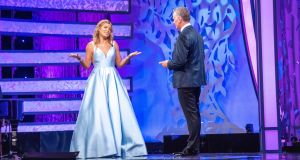 A competition that asks you to judge a woman not by her appearance, but by the calibre of her personality, the height of her attainments and the eccentricity of her party piece, the Rose of Tralee (RTÉ One, Monday, 8pm) apparently turns 60 this year. Although that seems unlikely.

Such an age, for instance, in human years, would be more than twice the limit for any contestant, who are forbidden to participate beyond the wizened old age of 29. They must also remain demonstrably unmarried, which, as one mid-show shot of several former Roses who married their escorts suggests, is presumably to give current escorts the illusion of eligibility. But the reason it feels hard to accept the Rose of Tralee as a sexagenarian is that it actually seems like something much older. How else could it have withstood the pace of time, so fundamentally unchanged, if it was not eternal?

Watching the first of the two-day broadcast, rationing out 18 contestants across an accumulated three hours, it certainly feels like that. “Most people go, oh my God, snoozefest!” the event’s adamantine host Dáithí Ó Sé levelled with one hopeful, the Germany Rose, Beatrice Beiderweiden. In fairness, he was assessing her chosen career, studying accountancy in the Black Forest, while she assured him that, when applied to agricultural funds, “it’s a lot of fun”. Next to the Rose of Tralee, you believe it.

If this also suggests that there’s a relatively low bar for those eager to distinguish themselves as quite the character, that seems to be the event’s enduring appeal too.

Many viewers will remember former contestants who either took strident political positions, as when Brianna Parkins called for a referendum to repeal the Eight amendment in 2016, or those who came to embody them, like Maria Walsh, who came out as gay shortly after winning in 2014, and now serves as an MEP. That’s because otherwise Roses tend to pass by in a thicket of speedy resumés, shots of proud families, stories of how their parents met, experiences of emigration, and, if absolutely all else fails, thorny japes about the general haplessness of their escorts, who never seem too pricked.

On the first night, some Roses stood out for their good deeds and caring impulses, like Mayo Rose Nicole Loughlin, who was once drawn to work in an orphanage in Malawi, and inspired afterwards to launch charitable campaigns at home. Others, not so much. Like Washington DC Rose Molly Eastman, who chose to remain equivocal about Donald Trump. “I respect the office of the presidency,” she hedged, which seems a controversial opinion when her president does not.

But do either moments lodge so securely in the mind as the Meath Rose’s party piece? Meghan Byrne’s turn was to draw a barbell laden with 100kg weights halfway up the length of her red ballgown. Sure, it’s inspiring to hear about people making the world a kinder place. But who’s doing the heavy lifting here?

Moreover, how do you even compare such wildly different achievements? It was impressive, for instance, to hear Loughlin enumerate all eight of her siblings, before the Arizona Rose, Kayla Gray, reeled off about as many degrees. The survivor of hydrocephalus and chiari malformation, who underwent experimental brain surgery in her youth, Gray counted theatre and neuroscience among her qualifications. And it showed. “I need to take whatever you’re taking,” Dáithí told her, now in his 10th year as host and tantalisingly close to taking his hands off the wheel. “I think it’s called ‘life’,” he auto-corrected. Dang. So close!

Gray’s own candidacy for Rose of Tralee had been the fruit of scientific research, when a commercial DNA kit proved her Irish ancestry. The technicolour-vividness of her red bangs and green eyes must have counted as a spoiler. “Oh yeah, get your cheek swabbed, send in your DNA, and you might even find a cousin,” Gray advised, before drawing a huge, glycerine-enriched bubble around Daithí’s tall frame. “I’m not sure what that looked like,” the host mused, who looked like a man briefly encased in a giant condom. She departed the stage, apparently in earnest, to get a tattoo to mark the occasion.

“They’re so natural and just insane to look at,” insisted Laura Vines, the Dublin Rose, as Dáithí nodded with recognition. “And they’re incredible ambassadors for herbivores,” she went on. That too, perhaps. Vines, a veterinary nurse working at Dublin Zoo, had steered the conversation on to elephants, and soon began describing the heft of their 50kg excrement. By this point she was deep in the stuff. “I talk about poo in all my interviews,” she beamed, and there seemed like worse alternative. Besides, she once brought a hamster back to life with CPR. “Only really lightly,” she noted of human-rodent mouth-to-mouth resuscitation. “You don’t want to burst him.”

That is the recommended treatment for the pageant too, which might not withstand a hardier exhalation. It’s the kind of show in which contestants may be psychologists, engineers, accountants or neuroscientists, but are introduced to us with their cute baby photos. Where they outline the demands of prison work or autism care, but demonstrate various Adele songs, putting challenges and some competitive ouzo-drinking. Sixty years on, it’s all so natural – and insane to look at.