TV review: Dermot Bannon takes on his most important project: his family home. But there’s something missing

Room To Improve star Dermot Bannon got a nasty surprise when he was told that the refurbishment budget for his own house would have to be doubled to approximately €600,000. Video: RTÉ 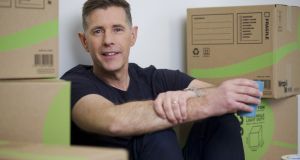 Room To Improve: Dermot’s Home: has the eeriness of a showhouse fitted with all the mod-cons but lacking that essential human touch. Photograph: RTE

The secret of Room To Improve’s success has nothing to do with the rooms or the improvements. The excitement in Dermot Bannon’s home makeover juggernaut has always resided in the interpersonal tensions bubbling up as couples and families embark on herculean do-overs of their homes and drive themselves, and each other, inexorably around the twist. It’s a relationship show disguised as property soft-porn, in which the arguments are more interesting than the architecture.

Maybe that’s why Room To Improve: Dermot’s Home (RTÉ One, Sunday, 9.30pm) doesn’t quite hold together. The premise is that the architect, having helped reimagine the building stock of the great Irish public for going on a decade, works his structural sorcery on a project of his own. Architect pick up thy t-square and walk etc. Ooh, you think, this will be fun. Is his wife impressed by his big ideas? Will his kids – including one teenager – roll their eyes whenever dad starts on about floating marble and rolled steel joists?

Well, we’ll never know because Bannon’s family are glaring absentees from the first of two episodes. Actually it’s worse: they are wispy half-presences, discernible as if from the corner of your eye but never caught on camera. Bannon talks about them at length and gets properly wobbly-lipped removing some kiddie crayon etchings from the fridge. Yet they are nowhere to be seen. It’s almost as if they’re Dermot’s imaginary friends and that he really lives alone, talking to cushions with drawn-on smiley faces.

This feels like an omission early on and soon threatens to be a deal-breaker. We see Bannon taking in the spectacular – but apparently insufficiently vast – kitchen at his existing address. This, he says, is where his kids have grown from babies into adolescents and where he has lived the most meaningful years of his life.

He shows us some of his children’s art; the camera cuts to a clutch of hurleys on a work top. Bannon’s eyes glisten. But the incorporeal family stays that way. Instead Dermot’s Home leans, a bit too hard, on Bannon’s differences – such as they are – with his builder and his quantity surveyor as he embarks on a makeover of a newly acquired 1930s-built home in Drumcondra in Dublin. The property is down the road from his old house – though I had to look this up as Room To Improve doesn’t tell us. Nor does it divulge that it originally set him back €850,000.

There’s lots of potential here. Bannon is portrayed as a world-class prevaricator and a walking briefcase of contradictions (he wants to dramatically reshape his new purchase but can’t bear to chuck out some old doorknobs). The brunt of the indecision is borne by builder Graham Byrne, who’s expected to sit on his hands as he waits on a series of crucial calls by his client.

Bannon, meanwhile, is in Oxford, gasping at the dreaming spires and genuflecting before super-architect Niall McLaughlin (why is McLaughlin so esteemed? We aren’t told beyond the vague fact that he is “award winning”). There is some dramatic tension between Byrne’s practical concerns and Bannon’s esoteric impulses, as there is when quantity surveyor Patricia Power sits Bannon down and explains he’s going to need to double his budget of around €350,000. Later green-fingered guru Diarmuid Gavin pops round for a starry cameo – he has strong feelings about a wall in the new garden.

However, a void squats in the heart of Dermot’s Home, which insists on framing Bannon’s struggle as that of one man against impossible odds. His family presumably didn’t fancy being reduced to glorified exhibits in the reality TV zoo and that is an entirely reasonable stance.

Yet their absence compromises the episode which for long stretches expects us to share in Bannon’s angst over whether wraparound windows are a bit too much (we don’t care Dermot, we just don’t care). Somewhere along the journey from drawing board to finished edifice, the producers have got it into their heads that we watch Room to Improve for the architecture when actually it’s the flesh and blood melodrama that reels us in. And without it, Dermot’s Home has the eeriness of a showhouse fitted with all the mod-cons but lacking that essential human touch.