The presenter of RTÉ’s new Poetry Programme can’t name a poem by Seamus Heaney. So can his popularity win over younger audiences? 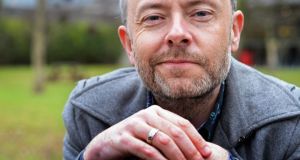 Rick O’Shea: ‘Being really well-prepared and well-briefed is the key to doing any interview.’ Photograph: Eric Luke

Rick O’Shea, the likable and popular broadcaster, is looking across the RTÉ canteen table at me as if he’s slowly transforming into a seal pup who fears clubbing.

O’Shea, who presents an afternoon show on RTÉ 2FM five days a week, has been talking non-stop for half an hour about his – clearly sincere – lifelong interest in the “written word”, and he knows what’s coming next in this interview.

O’Shea has been “trying to wedge the written word into the day job in various ways”, as he puts it. Last year, he set himself the challenge of reading 100 books in the year and blogging about it.

“Then people started asking me to do things to do with the arts,” he says. He has been an increasingly frequent contributor to Arena, the RTÉ Radio 1 arts show. “I started getting asked to do interesting things.”

Earlier this month, O’Shea was announced as the new presenter of the Poetry Programme on Radio 1. It was not a job he had applied for. “I was asked by RTÉ if it was something I was interested in. I thought about it for about four seconds and said yes. They know I’m interested in arts programming in the long term.”

O’Shea’s producer at 2FM, Claire Cunningham, had tendered for the process, and she will produce the show. The commission specification, which was on the RTÉ website, stated that the show was to be “presenter-led, preferably by a well-known and/or well-regarded figure from the world of poetry and/or literature. He/she should have an in-depth knowledge of Irish poetry and an established ability to further the debate on poetry via the national airwaves.” The budget for the 30 half-hour shows is €76,440.

It has been four years since RTÉ had a poetry programme on air; the last show was presented by poet Pat Boran. In a country that loves to tell the world how much it values arts and culture, it is to be welcomed that we once again have a weekly programme for poetry from our national broadcaster.

It would be disingenuous to describe poetry as a popular art form. Whether it’s the classics, contemporary poetry or slam, the audience will always be niche. The editorial brief for the show also stated that “producers should be mindful that proposals are designed to address RTÉ Radio 1’s commitment to growing audiences in the 35-54-year-old demographic”.

O’Shea is an active presence on social media, with, for example, more than 42,000 followers on Twitter. “Part of doing this show is about trying to bring a much wider audience to poetry in general,” he says. He’s already tweeting from a new account, @PoetryProgRTE.

O’Shea knows that he will be depending heavily on his team, which includes Julien Clancy, researcher Dave Lordan and consultant Niall MacMonagle.

“I won’t be creating this show by myself,” he says. “It’s all about the strength of the team. I figured that out in over 22 years of being a radio presenter.”

The format, which had already been worked out by the time O’Shea came on board, will roughly feature one big interview a week, a package by another team member and various other bits and pieces.

As enthusiastic as O’Shea is, it’s a fair question to ask: what does he know about poetry? This is the point when he starts looking like a vulnerable seal pup, and my club has to come out from under the table.

What does poetry mean to you, Rick?

“It’s a tiny little corner of beauty in an otherwise grey, workaday world. Poetry is a moment of beautiful escape.”

Then I ask the cheesiest question in the interview book, multiplied by three: what are your three favourite poems?

He has the name of one poem prepared: Shelley’s Ozymandias. “And I didn’t do it for my Leaving Cert,” he adds. But he can’t name two poems he loves, let alone three. “It’s really hard to choose,” he says eventually, mentioning something about how it was “an honour” to sit near Paul Durcan at a recent book awards ceremony.

Can this simple question to the presenter of a poetry programme really have bopped him on the head so easily? I try again. Second cheesiest question ever to do with Irish poetry: what’s your favourite Seamus Heaney poem?

Have you actually read any of Seamus Heaney’s books?

“No. I haven’t read him all, by any stretch of the imagination.”

Then I keep on bopping, because it’s a bit addictive. “Which presenter of the Poetry Programme in the past do you think did the best job?”

“I’ve never listened to it ever.”

Do you know who any of the presenters were?

“No. How would I when I’ve never listened to it?”

I don’t want to club O’Shea. He’s refreshingly candid about his lack of knowledge about poetry. He seems very excited about an opportunity he describes as “thrilling”. He’s anxious to acknowledge and give credit to his team, who will undoubtedly be essential to the success of the show.

And, as O’Shea says: “Being really well-prepared and well-briefed is the key to doing any interview.” Which is undoubtedly true.

The challenge now for him and for his team is balancing his enthusiasm with his lack of the “in-depth knowledge” of poetry the show claimed to be seeking. O’Shea and the team will have to deliver a poetry programme that will entertain and engage, but that does not patronise its listeners or become embarrassing.

Growing the audience is an aspiration every broadcaster has. The Poetry Programme first has to make sure it can connect with its core audience.

The Poetry Programme starts at 7.30pm on RTÉ Radio 1 on January 24th