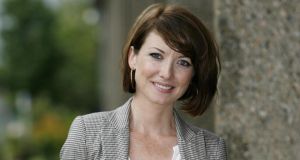 Republic of Telly hosts Bernard O’Shea and Jennifer Maguire (above) have been announced as the new presenters of RTÉ 2fm’s breakfast show.

Republic of Telly hosts Bernard O’Shea and Jennifer Maguire have been announced as the new presenters of RTÉ 2fm’s breakfast show.

They will be joined by Keith Walsh, presenter of Phantom FM’s breakfast programme.

They will replace Hector Ó hEochagáin, who stepped down before Christmas after two years in the slot.

The announcement was probably the worst kept secret, but, according to Maguire, they found out “about three minutes” before it was made.

“The dogs in the street knew before we knew. With TV and radio, nothing is solid. Nothing is certain until the last minute. We had to be really sure and it is all about timing,” she said.

“My life is going to change,” she said, referring to the early starts. “My partying is going to be kept for the weekends.”

Walsh said his elevation to 2fm’s national schedule was “beyond my wildest dreams”.

“I know Jennifer and I’ve worked with Bernard before. It’s just going to be the best fun.”

Both O’Shea and Maguire are going to continue on with the ratings success that is Republic of Telly. In addition, O’Shea’s wife is expecting a baby next month.

“I’m planning on climbing Kilimanjaro as well,” he quipped.

No date has been set for the first show, but it is likely to be next month.

The decision is part of an overdue revamp of 2fm’s schedule by its new controller Dan Healy.

The delayed announcement was made on 2fm’s Twitter account, which featured a picture of the new presenters with the mocking line: “So I guess these guys will have to do.”

The new breakfast show will broadcast from 7am to 9am and will be based in Dublin, unlike Hector’s show, which came from Galway.

Republic of Telly has been a big ratings winner for RTÉ Two. Both O’Shea and Maguire will guarantee a large audience for the critical slot.

The announcement comes ahead of the JNLR results tomorrow which will be interesting for all the major radio stations - particularly for Pat Kenny and Sean O’Rourke.

Lucky Per: Denmark’s Nobel-winning version of the Great Scandinavian Novel