For its big-budget drama based on the 1916 Rising, the broadcaster has turned to the Finnish director Aku Louhimies, who can bring a new perspective to Irish history

The cast and crew speak about the challenges and pressures of bringing RTÉ's flagship Rebellion series to life. Video: Enda O'Dowd 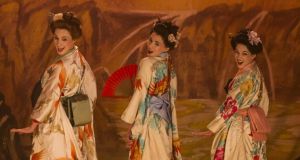 Rebellion: Ruth Bradley as Frances, Charlie Murphy as Elizabeth and Sarah Greene as May in Aku Louhimies’s five-part Rising drama for RTÉ

Ireland is not the only country to have used the first World War to strike for its freedom only to descend into a vicious civil war. In December 1917 the Finns staged a bloodless coup to announce their independence from Russia, with a declaration very close in sentiment to the Proclamation of the Republic. But the subsequent civil war between the communist-supported Reds and the German-supported Whites – the Whites won – left a lasting bitterness.

The parallels between events in his home country and those in Ireland a century ago are striking for Aku Louhimies, the 47-year-old director of Rebellion, RTÉ’s flagship drama to mark the Easter Rising of 1916. For him they suggest that, although the circumstances of the Rising were peculiar to Ireland, the motivations of the participants and the experiences of everybody who was involved also have a far more universal aspect – and in that respect become a story with many elements of great drama.

RTÉ’s head of television, Glen Killane, says that the five-part drama, which begins this weekend, will leave a “long-lasting legacy” and have a similar impact to Strumpet City, the last full-scale period drama that RTÉ produced, in the 1980s. No pressure, then.

The series has been written by Colin Teevan, who also wrote Charlie, last year’s dramatisation of Charles Haughey’s political life. Unlike that series, Rebellion eschews the “great man” version of history in favour of telling the story of the Rising through fictional characters. Pádraig Pearse, James Connolly and Countess Markievicz all appear, but the drama is not about them.

The main characters are Elizabeth Butler, a middle-class revolutionary who joins the Irish Citizen Army; the brothers Jimmy and Arthur Mahon, one of whom is in the Irish Citizen Army but the other of whom is in the British army; Frances O’Flaherty, a teacher at St Enda’s, the secondary school that Pearse set up in 1908; and May Lacy, a clerk at Dublin Castle who is torn between her British lover and the revolutionary struggle.

Louhimies frets that – spoiler alert – the first episode contains little rebellion. But it is, nonetheless, a gripping opener, in which the characters are propelled by the choices they make into a situation beyond their control.

Louhimies used the technique of fictional protagonists for his film about the Finnish civil war, Käsky (Tears of April), and he hopes that his outsider’s perspective will benefit this new drama. Being an outsider certainly made him keen to get to grips with this Rising, many aspects of which he found puzzling. Why did the rebels rise when they knew they had no chance of victory, for example? Why did they occupy some buildings and leave others, potentially more important, unoccupied?

“It is hard to understand how unorganised things were in those days. Connolly had been in the British army; he should have known,” Louhimies says. “The script has elements that are harder for foreigners to understand. I didn’t have a background in that sense of these historical characters.”

The nuances of Irish accent were also a puzzle. “He can’t be Michael Collins,” people would say; “he doesn’t sound Cork.” “In Finland you can’t tell at all.”

Rebellion looks great. Louhimies and his team have created an authentic-looking Dublin circa 1916. The director got permission to film in a series of important buildings, the GPO, Dublin Castle and Trinity College Dublin among them.

Rebellion cost an estimated €6 million, which is cheap by the standards of international high-end period drama but a huge budget by Irish standards. (It was mostly financed by RTÉ and the Broadcasting Authority of Ireland.)

Fortunately, there will be opportunities to claw back some of the production costs. The series is coproduced, and will be shown in the United States, by SundanceTV, which is available in 57 million US households.

His only regret is that the series could not be longer. “It could have been bigger. If they had more money we could have made more episodes. There is so much to tell,” he says.

Rebellion is on RTÉ One on Sunday, January 3rd, at 9.30pm