The cast and crew speak about the challenges and pressures of bringing RTÉ's flagship Rebellion series to life. Video: Enda O'Dowd 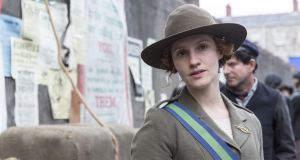 Rebellion: Ruth Bradley as Frances who plays the part of a teacher at St Enda’s

RTÉ has fired the first major shot in its 1916 centenary programming with glossy drama Rebellion, set during the days surrounding the Easter Rising.

Elizabeth Butler (Charlie Murphy), is a medical student whose fiance and family are keen to show their allegiance to the British during the war and maintain the momentum of Home Rule. Elizabeth, though, has joined Countess Constance Markievicz’s battalion, which is planning to take Stephen’s Green during the Rising from its base in the Royal College of Surgeons.

This will also get her out of her imminent marriage to soldier Stephen Lyons (Paul Reid), while her compatriot in the Irish Citizen Army Jimmy Mahon (Brian Gleeson) pines in the wings.

Her friend May Lacey (Sarah Greene) works at the British headquarters at Dublin Castle, and is having an affair with Charles Hammond (Tom Turner), assistant to the British chief secretary. When his wife arrives to Dublin, and May is spurned, she steals a document indicating that the British are about to round up Irish Volunteers and Sinn Féin members – which is just the impetus the Volunteers need to get a strong show of force on Monday. She passes the document to Frances O’Flaherty (Ruth Bradley), a teacher at St Enda’s with Pádraig Pearse (Marcus Lamb), who we see schooling the children in making homemade bombs.

With Rebellion, Colin Teevan has taken a different tack to Charlie. That was a straightforward biopic of former taoiseach Haughey’s rise and fall: here, he’s made the ambitious choice to have the fictional characters as the main dramatic drivers, while the Rising’s familiar protagonists operate on the sidelines. Brian McCardie, with the Edinburgh burr of James Connolly, makes one dramatic entrance; Countess Markievicz (Camille O’Sullivan) gets just a single, hammy scene. Best of the bunch so far is Marcus Lamb, who exudes a subtle charm and unsettling conviction as Pearse.

The other main character, of course, is Dublin (in the first episode, the action doesn’t move beyond the city). Some familiar streets look more modern than they should, and the language is more contemporary than period, never more so than when May says “I’d rather be f**ked by an Englishman than brainwashed by an Irishman.” (Brainwashed as a term first appeared in the 1950s.) But director Aku Louhimies still has a chaotic battle, a cartload of stories, and a record RTÉ budget of about €6 million to get through. He’s set the scene adroitly: here’s hoping the sturm and drang of the Rising can set the screen on fire.

Rebellion is on RTÉ One on Sundays at 9.30pm