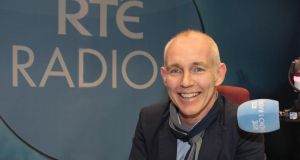 Ray D’Arcy pictured as he started his new afternoon show on RTÉ Radio 1 at the RTÉ Radio Centre in Donnybrook, Dublin this afternoon. Photograph: Brian McEvoy

Ray D’Arcy’s defection from Today FM to RTÉ late last year caught everyone off-guard, but nearly two months after the news broke one would think that the presenter himself has got used to the idea.

But as he kicks off the newly-minted version of The Ray D’Arcy Show the presenter tells listeners that he has stickers up on the studio walls reminding him that he is now hosting an afternoon programme on Radio 1. He manages to get those basic facts right, which is just as well, as his new station and timeslot can seem the only new things about the RTÉ incarnation of his show.

Heeding the old adage about not fixing things that ain’t broke, D’Arcy sticks to the format that served him so well on mornings at Today FM. There are personal ruminations, celebrity interviews, lifestyle items, musical interludes and true life stories. The topics range from the mind-meltingly frivolous – D’Arcy muses for several minutes why soup at the RTÉ canteen costs €1.02 – to the most profound, such as the existence of God.

As for the presenter himself, though he encounters various technical glitches as he navigates his new studio – his first song fails to play – he betrays little in the way of nerves.

In his opening spiel, he tells of how self-conscious he felt on his return to the Montrose campus, to the point that he sneaked in by the goods entrance in order to avoid meeting people on his first day back. Then, as if to underscore his diffidence at being back at the national broadcaster, he introduces living RTÉ legend Gay Byrne as his first guest.

“Welcome back, dear boy,” Byrne gushes, before the pair discuss the interview with Stephen Fry about religion which went viral.

This conversation marks the first sighting of one of D’Arcy’s perpetual themes, namely how the church has been badly damaged by numerous scandals. It’s a lively and affectionate exchange, though D’Arcy has no more luck in getting Byrne to reveal the man beneath the on-air persona than anyone else. His chat with Paul Howard, aka Ross O’Carroll Kelly, is less profound, but has a nice light quality.

Other items have a familiar ring. D’Arcy talks to Al, who has just quit smoking, and recruits two mentors whose progress at giving up cigarettes he had previously followed in his old berth: ongoing human interest stories are one of the presenter’s trademarks.

Except it’s not quite. The music is more genteel than before, such as the live and very tasteful a cappella version of Pharrell Williams’s hit Happy, suggesting a more sedate target audience. Nor is there any sign of the exasperated outrage on political or social matters that has so often marked his performances.

It’s only his first day, of course, but it’s also an implicit reminder about the public service sensitivities of his new home. It’s a reassuringly enjoyable start, though the fun will only really begin when D’Arcy rocks the boat.