For fans of the presenter’s soft-focus style, two weeks away seemed like a lifetime, but now she’s back in the cosy seat in ‘Sunday with Miriam’ 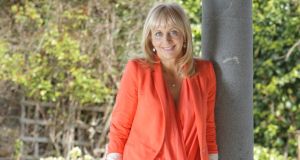 In a year that has seen prominent broadcasters return after long hiatuses – Ivan Yates and John Murray spring to mind – last week witnessed surely the highest-profile comeback of 2013, by a presenter who has been absent for an unaccustomedly lengthy period. Yes, after a full two – count ’em: two – weeks off the radio, Miriam O’Callaghan was finally back on air, doubtless to the relief of those, Montrose bosses among them, who feel that without her presence RTÉ’s schedules are fatally lacking.

After a six-month stewardship of John Murray’s weekday show, O’Callaghan was back in her Sabbath slot on Sunday With Miriam (RTÉ Radio 1), hosting a new format that owed much to daytime talk radio. Gone were the hour-long human-interest profiles of her previous Sunday programme, Miriam Meets, replaced by music, competitions and interviews that ran from the soapiest of celebrity love-ins to more jarringly sharp-cornered encounters.

From the off the show allowed ample opportunity for O’Callaghan to indulge her tendency towards the soft focus. The presenter spoke down a crackling mobile-phone connection to the actor Victoria Smurfit, going for the jugular in customary fashion as she quizzed her guest about life in Los Angeles: “What do you love about where you are?” Other questions included whether Smurfit stayed in touch with Ireland and if she missed the rain here, which gives some idea of the interview’s substance.

Even when conversation turned to Smurfit’s career, O’Callaghan fixed on a nude scene that the actor had to perform for her television series Dracula. Smurfit spoke about her momentary distress at doing the scene, which could have prompted discussion about the portrayal of women in the screen trade. The chance went begging.

But the programme also highlighted O’Callaghan’s strengths, often overshadowed by her doe-eyed best-friend shtick, as when she spoke to the former MP and republican activist Bernadette Devlin McAliskey. The item had its bumps: as flintily uncompromising as in her heyday, McAliskey did not easily respond to her host’s naturally empathetic style. When asked whether her early drive was down to the premature deaths of her parents, she dismissed the notion, saying it was due to the North’s social upheaval in the 1960s.

And as McAliskey decried the peace process as “the management of sectarianism”, O’Callaghan did not push her guest on the more problematic aspects of her past, such as her role in founding the Irish Republican Socialist Party.

But the approach drew out other aspects, yielding a more rounded picture. McAliskey spoke about the attempt to assassinate her in 1981, describing the unexpected calmness she felt in the face of her possible death while outlining her (deeply plausible) reasons for suspecting British army collusion in the attack. She also displayed flashes of wry humour, describing the names of her would-be assassins – Watson, Smallwoods and Graham – as sounding “like a firm of solicitors”.

More pertinently, the interview drew attention to McAliskey’s all-too-rare role as a prominent woman in Northern politics and Irish public life in general. Listening to an archive clip of herself as a young MP, McAliskey said she was struck that she did not identify with her gender back then but instead spoke about “Irishmen”. She went on to give an excoriating analysis of why women still lagged behind males in terms of representation and economic power. “The structures of the society in which we live were created by men for men, and they never intended us to be in them,” McAliskey said. “They intended us to be at home.”

It was telling that O’Callaghan did not demur from this verdict. Her ubiquity cannot hide the uncomfortable fact that there are still far too few female voices on Irish radio.

That is not to say that an unreconstructed male world view rules the roost elsewhere. On Monday’s The Pat Kenny Show (Newstalk, weekdays) there was much anxious discussion about the demeaning portrayal of women when the host spoke with Fergal Rooney, psychiatrist at St John Of God Hospital, about the supposedly ever more powerful hold that sexual imagery exerts on popular culture. As he discussed the risque videos of contemporary singers such as Robin Thicke, Kenny reminded listeners of the scandalised reaction that had greeted Elvis’s swivelling hips. “If we had been talking about this 20 years ago we would be talking about Madonna’s Sex book and Erotica album,” agreed Rooney.

But far from sounding au fait with this hot-button topic, the calm detachment with which Kenny and his guest discussed crazes such as twerking or the antics of Miley Cyrus made them sound like middle-aged men patronisingly indulging the follies of young women in particular. Kenny’s assessment of a “misogynist” video by the singer Lily Allen unwittingly summed up the item.


Moment of the Week: A breakfast ballet-hoo
Always the most alpha of males, Ivan Yates, copresenter of Breakfast (Newstalk, weekdays), sounded a predictably perplexed note as he discussed ballet, of all things, with Stephen Brennan of Ballet Ireland on Tuesday. Admitting he had never been to a ballet, Yates wondered whether there was singing or dialogue. No, said Brennan, ballet was “opera without words, poetry in motion”. Yates sounded dubious: “So how do you follow the storyline?” “By using your eyes,” came Brennan’s quietly lethal reply. “And your intelligence.”

My dad the spy: Stewart Copeland on his father’s secret life as a CIA agent
8