Radio: Ray D’Arcy’s old habits are a ray of sunshine on play-it-safe RTÉ

Review: Radio 1’s new presenter voices his opinions to bracing effect. The rebooted ‘Media Show’ could learn from such candour 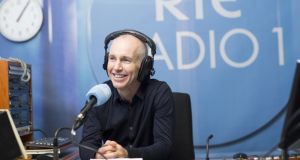 Ray D’Arcy: any qualms that he might steer clear of contentious issues are dispelled on his second day

Hosting the afternoon slot on the nation’s biggest radio station may be a new start for Ray D’Arcy, but, less than a week in, he is slipping into old habits. On Wednesday’s edition of the freshly transplanted Ray D’Arcy Show (RTÉ Radio 1, weekdays) the presenter canvasses his audience to share their opinions with him at “Ray@TodayFM”, before realising he has given out his old programme’s address. “Oh, there you go,” he says, chuckling ruefully. “That’ll be a slap on the wrist.”

In truth, his lapse won’t land him in hot water. He may retain some muscle memory from his years at Today FM, but D’Arcy already sounds so at ease in his RTÉ berth that his slip might have gone by unnoticed had he not drawn attention to it himself. It’s his other old traits that may end up causing ripples on the Montrose-management pond.

After the meet-and-greet atmosphere of his inaugural show – complete with the imprimatur of an appearance by Gay Byrne – any qualms that D’Arcy may steer clear of contentious issues are dispelled on his second day. Talking to the Irish author Emma Donoghue from her Canadian home, D’Arcy briefly discusses the film version of his guest’s novel Room before moving on to more personal matters.

Donoghue, who is in a same-sex relationship, tells how having children has helped her writing, but D’Arcy is more interested in whether his guest’s offspring have different names for their two mothers. The line goes silent – twice – but it’s down to technical hitches rather than Donoghue’s taking offence (although D’Arcy sounds a little nervous the second time it happens). The conversation soon turns from small details to the bigger picture, as D’Arcy observes that the Canadian state paid for Donoghue to find a sperm donor.

This is an important matter for the writer. “That we would be legally the parents from the first day made us feel safe,” she says, noting that the process would have been “much more precarious” in Ireland. When talk inevitably turns to the forthcoming referendum on same-sex marriage D’Arcy dutifully asks whether children are entitled to a father and mother. More noticeably, he steps back to allow Donoghue to state her belief that voting yes is “the only possible fair step”. D’Arcy’s hands-off approach is in conspicuous contrast to the scrupulousness with which other RTÉ presenters flag both sides when discussing the referendum.

His editorialising streak is evident on Wednesday when he talks to Tara, a Cork woman whose journey to Britain for an abortion is covered in a BBC TV documentary (reviewed opposite). D’Arcy asks Tara whether she knows that she could be jailed for 14 years if what she did in England occurred here, before airing one of his trademark riffs: the anomaly of the Constitution guaranteeing the right to travel “to do something that is a crime here”.

D’Arcy proffers no opinions on how to overcome this discrepancy, but one doesn’t need to read between the lines too much to guess his preference. None of this is new on D’Arcy’s part, nor even particularly brave. He has, after all, built his reputation on knowing what gets the public talking.

Such moments are also outweighed by less taxing fare, such as his shaggy-dog conversation with his regular guest Michael Harding, another old habit he has taken with him from Today FM. But coming in a slot that, during Derek Mooney’s tenure, had all the hard-hitting impact of a pillow fight, D’Arcy’s current-affairs candour is bracing – and highlights just how safe RTÉ’s big names have been playing things until now.

It will be interesting to see if D’Arcy’s move is covered on The Media Show (RTÉ Radio 1, weekdays). Introducing a new season of the programme, Conor Brophy promises to reveal “the sound behind the bites” – a statement suspiciously like a soundbite – and to discover whether the Irish media, including RTÉ, “is delivering for you as readers, listeners and viewers”. Such aspirations suggest juicy insider information and devastating analysis of the Irish media, but the programme is too general in scope and restrained in approach to live up to its fearless billing.

It has its merits, however. Although it retains the name it had in its first series, this second run not only features a new presenter, with Brophy replacing Brenda Power, but is also made by a different production company, Old Yard. This results in a welcome change in tone, shifting from the old programme’s lofty air of authority and big interviews to a more open-ended spirit of inquiry.

So there is an intriguing portrait of the cable news channel Al-Jazeera from Irish employees past and present, plus a discussion about the changing role of media moguls with David Folkenflick of NPR. But there is also a sense of missing the target, be it the lack of a non-Irish (or even nonwestern) Al-Jazeera figure who could say how it plays with Middle Eastern audiences, or the broad sweep of Folkenflick’s discussion, which glides over Denis O’Brien’s powerful position in Ireland. Ireland’s media elite will hardly be quaking in their boots.

Even so, Brophy is an agreeable host, mixing curiosity with an easy command of information. All the show needs is some of D’Arcy’s bite.

Moment of the Week; Pioneering spirit
Following the new proposals to curb binge drinking, Matt Cooper, host of The Last Word (Today FM, weekdays), hears from his station colleague Dermot Whelan about his decision to give up alcohol. Having similarly forsworn drink, Cooper should be sympathetic, but instead he gleefully baits his guest with the incredulous questions he usually fields himself. “Are you no craic now?” he asks, wondering if Whelan has had his “last glass of creamy porter and delicious red wine”. To quote Cooper himself, it’s enough to drive you to drink, if it wasn’t so expensive.

John Cleese: ‘Why don’t you Irish spell your names properly?’
10