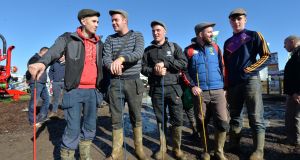 Farmers from Bunclody on the third and final day of the National Ploughing Championships. Photograph: Alan Betson

Unlike some presenters on their mandatory annual trip to the National Ploughing Championships, Sean O’Rourke seems to enjoy himself whenever he visits the mammoth event. Broadcasting from the Tullamore site (Today with Sean O’Rourke, RTÉ Radio 1, weekdays), he revels in the atmosphere. By way of capturing the mood, he approvingly recycles a quote about the GAA by commentator Marty Morrissey to describe the event: “Listen to the heartbeat of the people of Ireland.”

One presumes that O’Rourke doesn’t mean to imply that the urban population is somehow lacking in authentic Irishness, but rather is getting carried away by his now-traditional interview with President Michael D Higgins. This encounter has certain rituals that have to be followed: uncharacteristic shows of deference by O’Rourke; enthusiastic displays of knowledge about rural arcana by the President; and, most crucially, a half-hearted attempt by the host to divine whether his guest is planning to run for re-election.

O’Rourke is aware of the predictability of his query, prefacing it in suitability quixotic terms. “My last question is the same as the last question last year,” he says, sounding less weary than cheerfully resigned. Sure enough, President Higgins kicks to touch without so much as a gentle tackle from his host.

It’s a positively hard-boiled encounter compared to the presenter’s chat with pop impresario Louis Walsh, who glides on to O’Rourke’s show with an air that’s gossipy yet almost regal in its self-absorption. Asked about his farming background, Walsh establishes his credentials by referring to his Co Mayo childhood “with cows and everything like that”. It’s unsurprising to learn he was more interested in listening to the radio.

That’s as revealing as it gets. Walsh instead sticks to what he does best: he plugs his latest venture while giving away as little as possible about himself. Accordingly, there is a lot of upbeat spiel about his new TV3 show, Ireland’s Got Talent, but almost nothing when O’Rourke asks Walsh about his mother’s dementia: “She’s fine,” Walsh says.

The former Boyzone and Westlife manager is so impervious to interrogation that O’Rourke is floundering before their short encounter ends. “You didn’t come down in your Maserati by any chance?” asks O’Rourke forlornly. “No, I came down in a helicopter,” comes the reply, as though it is the most natural thing in the world. The ploughing championships may represent Ireland’s heartland but Walsh, for one, doesn’t seem at home there. It’s refreshing to hear O’Rourke in a good mood but it doesn’t really suit his style. The studio brings out the gruffly effective best in him.

Seán Moncrieff (Newstalk, weekdays) says he’s been down at “the ploughing” more times than he can remember, which may explain his slightly underwhelmed demeanour during his broadcast from Tullamore on Wednesday. The fact that it’s raining heavily ensures that his default setting of disdainful bemusement is even more doleful than usual. “My Gucci loafers are destroyed,” the host quips, playing up his metropolitan liberal image. That said, Moncrieff goes on to conduct an enjoyably amiable interview with retired Ireland rugby captain Paul O’Connell. (There seem to be as many former Irish rugby internationals at the event as there are ploughs: later on RTÉ Radio 1, John “The Bull” Hayes pops up on The Ray D’Arcy Show.)

Nonetheless, Moncrieff sounds more comfortable in the studio, even during an item as contentious as his interview with Tim Jackson, a local politician and anti-abortion activist from Donegal, who is on hunger strike to protest the repeal of the eighth amendment. Jackson is demanding that the Oireachtas Committee on Abortion watch a “grim and gruesome” video of a termination, which he feels “hits home with a lot of people, that there is a victim in this procedure”.

Moncrieff allows his guest the space to articulate his views, which are clearly deeply held and sincere, but increasingly presses him the longer the conversation continues. The presenter sounds a weary note when Jackson talks about people being “browbeaten” by pro-choice “elites”. He points out that not everyone agrees with his guest’s use of the word “baby” to describe a foetus. And he has a spirited exchange over the “moral balancing” of bringing pregnancies with fatal foetal abnormalities to full term.

Moncrieff sounds a note of exasperation as the interview closes, suggesting Jackson’s hunger strike is a “publicity stunt”. One can understand how Moncrieff, a presenter keen on empirical rationality, is frustrated by Jackson’s immutable insistence that a cell at inception is the same as a baby at birth. A striking takeaway from the exchange is the unbridgeable philosophical gulf between the views of Jackson and his host, none of which breeds optimism for a calm, reasoned debate on a proposed referendum.

Equally notable is the number of listeners’ texts criticising Jackson, particularly his belief that a pregnant woman has no say over what happens to her body. Moncrieff makes clear that he is not skewing towards one set of texters, but rather that the response is overwhelmingly pro-choice.

If nothing else, it shows that Newstalk’s audience, or at least Moncrieff’s, is more diverse than its detractors, or indeed its programmers, allow. Depending on where you take the pulse, the sound of Ireland’s heartbeat varies greatly.

Olivia O’Leary, the new presenter of The Poetry Programme (RTÉ Radio 1, Saturday), brings a different approach to her predecessor, Rick O’Shea, not least in her distinctive pronunciation of the word “poetry”. More importantly, O’Leary brings an authority to the subject that, strange though it seems, allows her guests to relax. This is evident in her lively interview with Liz Lochhead. A former Scottish poet laureate, Lochhead suggests that there shouldn’t be a rigid division between oral and written forms of poetry, emphasising this point with glorious readings of her own vernacular-heavy work. Before her last reading, Lochhead mock-seriously informs O’Leary that “this is not me speaking; you wouldn’t expect these sentiments coming from a lady like myself” before reciting her Song for a Dirty Diva. A sparky, wise item that underlines why radio is such a good fit for poetry.