Plus, innovations in GAA and Radiohead live at Glastonbury

The hit game show 'The Crystal Maze' returns to TV screens with Richard Ayoade at the helm. Video: Channel 4 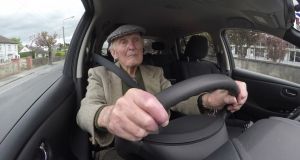 Too Old for the Road?
Monday, RTÉ One, 9.35pm
You don’t have to be a gangsta granny to tool around town in a fast car. Just ask Joan O’Rourke, who’s been given a speeding ticket at the age of 86. But Joan’s days behind the wheel may be numbered, along with many other pensioners whose health, eyesight and co-ordination are not what they used to be. Too Old for the Road? follows a group of senior drivers as they face the prospect of having to hand over their car keys and find another way of getting around. Micheal Hayes (83) needs his car to visit his wife in her nursing home, and Anne Moore (88) needs her car to get down the Naas Road to her holiday cottage in Co Kildare. With their health failing, both are worried that their driving licence will not be renewed. For 75-year-old ice-cream van driver John Taylor, aka Mr Ripple, losing his licence means he would lose his livelihood, but no such worries for the hale and hearty John Walsh – he’s confident that, at 101 years old, he’ll have no problem renewing his licence to drive his electric car.

GAA Nua
Monday, RTÉ One, 7.30pm
Gaelic games are said to be one of the oldest sports in the world, played by the Firbolg and Tuatha de Danann, but a new series, GAA Nua looks at how these ancient games have embraced modern techniques. All-Ireland winning Kerry football captain Dara Ó Cinnéide travels the four provinces to see how today’s GAA stars use science, technology, analytics and data to improve performance and gain a competitive edge over their opponents. Ó Cinnéide goes behind the scenes to see how clubs are plugging in to the latest scientific research and technological breakthroughs to turbo-charge their game.

A Plastic Whale
Wednesday, Sky Atlantic, 9pm
When a whale was found dead in a Norwegian cove scientists discovered the animal had swallowed 30 plastic bags while feeding at sea, which clogged up its system and caused its death. A Plastic Whale looks at the discovery of the whale and the subsequent clean-up effort along Norway’s coast, where currents can deposit rubbish from as far away as the UK.

Pitch Battle
Saturday, BBC One, 7.30pm
It’s time to stretch those tonsils, sharpen up those flat notes and get ready for all-out vocal war as six choirs go head to head in Pitch Battle. Mel Giedroyc hosts this great British shriek-off, and the participating choirs included a capella group All the King’s Men from Kings College London, Polish jazz group Alle Choir and the London International Gospel Choir. They’ll have to serenade a panel of judges that includes celebrity choirmaster Gareth Malone and Kelis, who used to be a choirgirl before she became a big pop star. Will there be a choral version of Milkshake? God, I hope not.

Tracey Breaks the News
Friday, BBC One, 9.30pm
In the aftermath of the British election, with a hung parliament and Theresa May losing her majority (and her credibility) Tracey Ullman will have plenty to get her teeth into in Tracey Breaks the News . In this one-off comedy special, Ullmann will add May to her repertoire of impressions, along with Angela Merkel, Nicola Sturgeon and Melania Trump. Yeah, but can she do a beardy Jeremy Corbyn?

The Celebrity Crystal Maze
Friday, Channel 4, 9pm
When the BBC retooled Robot Wars for a new generation, they scored a ratings hit, and now Channel 4 is reopening its most iconic attraction, in The Celebrity Crystal Maze. This time it’s presented by Channel 4’s uber-geek Mossy aka Richard Ayoade, who’ll be putting a few mildly famous people through a mindbending assault course.