Including The Old Guard, The Umbrella Academy, Unsolved Mysteries and Say I Do 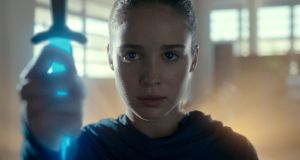 The Warior Nun: Adapted from a comic book of the same nam

July 1st
Who else but the producers of Stranger Things would dare drag the 1980s cult-classic series Unsolved Mysteries into the 21st century? With most hit podcasts and documentary shows concentrating on cold case true crime stories, it’s only right that the genre originator, Unsolved Mysteries makes a comeback. The show featured gruesome crime cases, paranormal happenings and unexplained phenomena. From introducing its viewers to the chupacabras and the skunk ape to more serious matters like disappearances and violent crime, its appeal was that of a sensationalist tabloid.

Crimewatch may have kindly advised its viewers not to have nightmares whereas Unsolved Mysteries positively encouraged them. Sleep-deprived children everywhere were regularly haunted by the image of Robert Stack staring down the lens, unblinking and unwilling to offer a solution or resolution to any of these terrifying ordeals. It’s no surprise that this latest iteration will be without a host as it takes on a more modern documentary-style format but the intention of the series remains the same, appealing to armchair sleuths to help solve these outstanding sometimes outlandish cases.

From the creators of Queer Eye comes this emotionally driven series that sees couples who have yet to walk down the aisle achieve the weddings of their dreams. Eight couples from different backgrounds and sexual orientation are aided by a trio of wedding experts who help with the planning of the proposal to the actual ceremony itself. In the tradition of Queer Eye, the show is as much about this team of professionals as it is the participants. Interior designer Jeremiah Brent, fashion designer Thai Nguyen and chef Gabriele Bertaccini all showcase their particular talents and involve themselves in the couples stories, becoming invested in their passions and regularly tearing up as they pull off these idiosyncratic celebrations in record time.

It may feature surprise weddings that take place within a week but Say I Do is the antithesis of the frankly demented, heteronormative car-crash that is Don’t Tell the Bride. There are no football themed nuptial monstrosities, exorbitant stag parties or tasteless trips on vomit-inducing roller coasters for these couples. Say I Do is a lush, romantic affair shot in a warm, gauzy haze that encourages its viewers to get swept up in the fantasy rather than consider the less than perfect reality.

The thoughts of a ninja-esque crew of avenging nuns roaming around may fill any ex-Catholic school-goer with a certain type of dread but the cartoonish Warrior Nun concerns itself with more metaphysical issues than some errant typos in the missalettes. Adapted from a comic book of the same name, the story revolves around Ava (Alba Baptista) a feisty 19-year-old who is haunted by dreams of her own death. When she wakes up in a morgue with an artifact embedded in her back it looks as though these night terrors have become a reality. This religious McGuffin is a calling card for the Order of the Cruciform Sword, a team of young nuns who fight demons on Earth to prevent it from being submerged into hell.

Ava must learn to juggle her new found responsibilities as part of this group of powerful women with her ordinary life of boyfriends and parties. For all its dramatic bluster, Warrior Nun is Buffy in a new cute habit. These young gun-slinging, razor-toting nuns may prove to be a guise too far for Irish audiences but their highly stylised battles and weaponised antics should appeal to film fans and Manga devotees alike.

This illuminating documentary charts the life and career of flamboyant Puerto Rican astrologer and sometime actor Walter Mercado. Mercado was no twee wooly jumper Russell Grant type; the Liberace of fortune-telling wore a giant bouffant hairdo to match his elaborate garments and extravagant jewels. A true phenomenon, he wowed his audience, reaching over 120 million Latinx viewers who regularly tuned into his readings. With guest appearances from Lin-Manuel Miranda and Eugenio Derbez, the documentary seeks to understand Mercado’s unique appeal, how a gender non-conforming, spiritualist became a permanent fixture on daytime television. With his daily affirmations and inspirational messages he evolved into something more important than just an astrologer, with his concentration on love and positivity, he became a symbol of inclusivity and acceptance within Latin America.

The Old Guard is the latest Netflix action movie attempting to capture the streaming success of surprise hit Extraction. Starring Charlize Theron, it’s a superhero yarn that centres on a warrior Andy (Theron) who is the head of a secret mob of immortal mercenaries who have been covertly protecting the mortal world for centuries. When their abilities are accidentally exposed during an emergency mission, Andy must eradicate those who wish to control, replicate or capitalise on their powers.

With The Witcher on hiatus and Game of Thrones becoming a distant memory, Cursed is the newest epic desperate to acquire a slice of the lucrative fantasy fandom. A twist on the Arthurian legend adapted from Frank Miller’s novel, it tells the story of Nimue played by Katherine Langford (13 Reasons Why) a young sorceress who is sent on a quest by her dying mother to deliver an ancient sword to its rightful owner. She teams up with a teenage mercenary named Arthur (Devon Terrell) and together they attempt to locate Merlin and reunite him with Excalibur. In this re-imagining of the myth, it is Nimue who learns to wield this magical sword in the face of invading forces who have destroyed her village and to protect her from the ominous intentions of King Uther Pendragon, Arthur’s father.

July 21st
Back for a new culinary adventure, this season Street Food is heading to Latin America where it will explore the cuisine of six countries including Mexico, Brazil and Argentina. The vibrancy and traditions of the food culture within places like Oaxaca, Salvador and Buenos Aires are delved into as local market stall holders and small restaurateurs explain the history and heritage behind their best known dishes. Created by the team behind the wildly successful Chef’s Table series, Street Food is a passionate, authentic look at how food is the common language that binds communities, the moveable feast that is passed down through generations.

July 22nd
Named after the crudely Xeroxed pamphlets that warned about the dangers of New York which were pushed into tourists’ hands in the late 1970s and early 1980s, Fear City is a docu-series about the hold that organised crime had over Manhattan at this time. It’s a look at how craven and corrupt the city had become during the 1970s that led to abject poverty for most of its citizens and the arduous task the FBI had of dismantling the five mafia empires who were at the height of their powers during the 1980s.

July 24th
This sequel to the hit teen rom-com sees Noah (Jacob Elordi) and Elle (Joey King) trying out a long distance relationship as Noah heads off to Harvard. It’s decision time for the couple as Elle grows close to a new classmate and is distracted by her dreams of going to college with her best friend, Lee as Noah quickly adapts to the freedoms of college life including his budding friendship with the seemingly perfect Chloe. With the original film becoming a sleeper success, due to its almost genteel storytelling, the off-screen romance of its leads and its cross generational appeal (John Hughes muse Molly Ringwald appears as Noah’s mother) Netflix will be hoping that its audience is ready to pucker up once more.

Season one of this comic-book caper was a runaway success with 45 million viewers streaming the story making it second to Stranger Things as Netflix most watched original series. Created by Gerard Way of My Chemical Romance and Gabriel Bá, The Umbrella Academy is an ambitious dark dramedy that revolves around a dysfunctional family of adopted super-hero misfits who reunite to solve the mystery of their father’s death. Its all star cast, which includes Love/Hate’s Robert Sheehan and Juno’s Ellen Page, will return as the Hargreeves siblings endeavour to reunite with each other and figure out the cause of the disruption that gave season one its shocking cliffhanger finale.