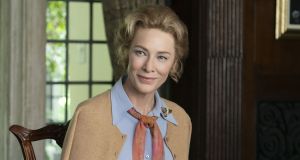 Cate Blanchett has portrayed Queen Elizabeth I, a whip-snapping Nazi with a killer fringe in an Indiana Jones film, and Galadriel, Queen of the Noldor and fairest Elf in Middle Earth. In other words, she has range.

Her latest role may be her most fantastical yet. In the tightly wound yet charming and occasionally effervescent Mrs America (BBC Two, Wednesday) she plays Phyllis Schlafly, the American conservative activist of the early 1970s.

Schlafly was a sort of all-American Mary Whitehouse. A right-wing lobbyist and lawyer, she campaigned against the United States’ equal-rights amendment, which was intended to make gender discrimination illegal.

Putting equal rights on the statute books would, she warned, disadvantage housewives and force women into the military (Vietnam was still rumbling on). It’s a pressure-cooker turn by Blanchett, who imagines Schlafly as a powerhouse of sharp smiles and weaponised glares.

She also pokes and prods the contradictions of a woman who elbowed her way past the sexism of her era in order to advance her cause. Her cause being essentially that women should welcome rather than rebel against gender prejudices.

Schlafly’s nemesis, both here and in reality, is the feminist Gloria Steinem, who is brought to life by Rose Byrne as a sardonic whirlwind in bug-eyed 1970s spectacles.

Both stars light up the screen and bring A-lister heft. Megawatt performances are similarly delivered by Uzo Aduba, as Shirley Chisholm, the first black woman candidate to seek the presidency (she was defeated in the Democratic primaries by George McGovern), Elizabeth Banks as the Republican feminist Jill Ruckelshaus and John Slattery as Schlafly’s loadsamoney husband.

Slattery was one of the best things in Mad Men, and there are echoes of that series in the obsessive, if not fetishistic, period detailing in Mrs America. Naff soft furnishings, collars to take your eye out, brown-on-brown colour schemes: seldom has the chintzy essence of the 1970s been conjured so deliciously.

But it’s the present-day resonances that land most forcefully. With the United States’ culture wars fanned to a wildfire under Donald Trump, Mrs America argues that there is nothing new under the sun – not even arguments about gender, diversity and representation.

The series’ show-runner, Dahvi Waller, takes care, however, to avoid preachiness and both humanises the conservatives and highlights the vanity and occasional cruelty of heroines on the liberal side. It’s even possible to ignore the politics and enjoy Mrs America simply as a drama about strong women with clashing ideals.

That’s a testament to peerless writing and steamroller performances, led by the quietly smouldering Blanchett.