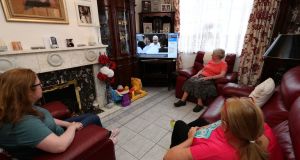 RTÉ’s coverage of the papal visit was transmitted globally and accessed by more than 76 broadcasters, a spokeswoman has said.

As Ireland’s public service broadcaster, RTÉ was the host broadcaster for the visit of Pope Francis.

Viewers in 159 different countries including Iran, Papua New Guinea and Swaziland accessed the coverage on RTE Player, RTE News Now App and RTE.ie, with over 300,000 streams on the RTÉ output which was accessible free to the public worldwide.

Data from Nielsen TAM shows that more than 1.8 million viewers tuned in to RTÉ’s special live television coverage of Pope Francis in Ireland across the weekend, the spokeswoman said.

An average of 535,000 viewers watched the full Papal Mass on RTÉ One television in the Republic of Ireland on Sunday.

The complete programme coverage anchored by Bryan Dobson reached an audience of 1.1million viewers who tuned in at some point during the broadcast.

On RTÉ2, the Festival of Familes concert event in Croke Park on Saturday evening saw 379,000 viewers on average watch the full four-hour programme with a peak of 570,000 viewers all watching at one stage, the spokeswoman said.