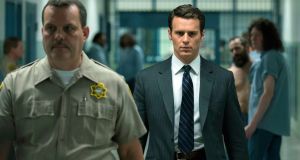 It’s finally happened. We’ve reached television serial-killer saturation point. There have been so many psycho-sexual killers stuffed into our eyeballs that as viewers we’ve become desensitised. The conveyor belt of corpses that slide through primetime TV seems never-ending. We’ve had more than a decade of an assortment of women’s blue/grey bodies observed on the slab, the description of their assaults and eventual deaths poured over in minute detail, which has become more graphic to entertain fatigued audiences.

Before all this, police dramas were mostly Bergerac whizzing round Jersey in his battered leather jacket with his cod-reggae theme tune or someone being interrogated by spiceburger-faced DCI Burnside in The Bill for buying a truckload of illegal fireworks.

These days you can have your serial killer served up in a variety of different ways, like a psychotic pizza. There’s the Lynda La Plante school of hard knocks for women, the Prime Suspect and Under Suspicion franchises full of salty, no-nonsense females.

There is the exotic strain of dour Scandi-noir, the cat and mouse pseudo-psychological silliness of The Fall, and the art-house undergraduate intellectualism of True Detective. Criminal Minds has now taken to having its own main characters feature in acts of outlandish peril because coming up with increasingly sensationalist ways to torture and kill women for an hour-long show every week was obviously becoming a bit much.

They can dress it up in different ways with arresting cinematography, surreal plot-twists, the female detective perspective, or award-winning actors and directors. But these dramas will always come back to the sinister fairy tale of the bogey man. Even the first series of True Detective, for all its conspiracy theories about the inherent evil within the shadowy establishment and its nihilistic philosophy, eventually amounted to acts of depravity by the rudimentary lone weirdo.

Almost every show of this ilk is following on from Jonathan Demme’s groundbreaking Silence of the Lambs. In the 26 years since, serial killers have quietly transferred from the big screen to our private homes. The Yorkshire Ripper now sits in your house like an ornamental vase on the mantelpiece. Characters that were once truly fascinating and horrific have become average: their constant presence has made them workaday murderers. Is there anything left to say about the now clichéd character of the serial killer?

If anyone can revive this flagging genre it should be David Fincher. This is the director that gave us the schlocky shocks of Seven and Zodiac, the latter a masterpiece about obsession and how these opaque histories haunt our humanity. Zodiac was the story of the unknowable killer but played out through procedure, and the attempt to bring him to justice rather than concentrating on the psychology behind the crimes.

Mindhunter, Fincher’s much anticipated new 10-part drama for Netflix again centres on the collation of information, not just the exploration of the fractured psyche of the serial-killer character.

The series, set in 1979, follows the establishment of the Elite Serial Crime Unit by two FBI agents, who try to understand the minds of these murderers in an effort to solve on-going investigations. So far, so Criminal Minds, and this is the unfortunate issue with Mindhunter.

Audiences have seen this template many times throughout the genre. Most telly sophisticates by now feel that they’re adept in this language. They can differentiate their Dahmers from their Nilsens without much difficulty so to take them back to the invention of psychological profiling could make for laborious viewing. Recent audiences, raised on violent content, will be left disappointed by the first two episodes. This is about the arduous work of detection and it is serious, manly work.

In its ponderously, funereal-paced first episode there is an avalanche of exposition, which is like watching bits of other crime shows patched together to create a shonky megamix.

Here, writer Joe Penhall deals almost exclusively in leaden crime conventions. There is the criticism of “renegade” ways by crusty old superiors; there are men wearing suits in smoky bars straight talking into their whisky glasses; and there is the inevitable clash between the working cops on the ground and the highfalutin would-be psychologists sent to teach them new investigation methods.

You can also play character-cliché bingo: there’s Jonathan Groff’s young Holden Ford, a trailblazing but naive neophyte trying to shake up the system. He is partnered with Holt McCallany’s gruff, seasoned detective Bill Tench, who Ford has much to learn from. Throw in a sassy, liberated girlfriend and you have a crime show that veers straight into laughable parody.

There are glimpses of what the series could blossom into outside of its irritating, redundant caricatures. 1979 was a turning point in the aftermath of the age of Aquarius under the spectre of Charles Manson – the man who murdered the myth of the Summer of Love – and after the era of the Son of Sam.

Misogyny is insidious and the opinions of those investigating the crimes often coalesce or empathise with the presumed monsters they are hunting. Scenes where Ford visits a serial murderer have that Fincher effectiveness: there is a removed coldness and a matter-of-fact delivery about his crimes. The young agent tries to engage the killer through a conversation about the debasement of women as a kind of game of prowess, which is about as revealing as the stock boy-scout character of Ford gets.

At the end of the second episode, we leave our fearless detectives setting up their X-Filesesque office in the basement of the FBI headquarters to the tune of Talking Heads’ Psycho Killer. It’s about as subtle as being bludgeoned over the head with a claw-hammer by that quiet guy that kept to himself.

Mindhunter might evolve into a complex drama with a true heart of darkness but for now its supposed vanguards are preaching from a rule book that most savvy audiences could write themselves.

The Books Quiz: Who wrote The Naked Lunch?
10