Maureen Flavin, the Mayo weather woman who made D-Day work 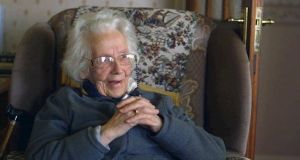 It’s hardly unusual for a young woman to be out late at night on her 21st birthday. But on June 3rd, 1944, Maureen Flavin had a compelling reason. At 1am she crept into the Blacksod weather station in Co Mayo, a lonely, low, wind-beaten building, where she noticed a steep drop in atmospheric pressure – a red flag for storms to come – and relayed her observations to the Irish Met Service in Dublin.

In doing so, without realising it, she helped to postpone the D-Day landings, the turning point of the second World War. And, in the ticklish “what ifs” of history, her report a day later, forecasting a window of clemency after that storm, helped to secure victory for the Allies, and to make history.

Still with us and sharp as a tack at 96, Maureen Sweeney (as she is now) essentially represents the role Ireland played in the war too: quiet, almost unnoticed, but pivotal.

Timed to accompany the 75th anniversary of D-Day, Storm Front in Mayo (RTÉ One, Thursday, 10.15pm) is as stirring an account of the military operation as you could hope to find, parsed by historians, vivid with archive footage and surging by music. But it is more graced with the contribution of Sweeney herself and the 92-year-old British veteran Joe Cattini, who together illustrate the major consequences of crucial moments.

“Teamwork wins wars,” said Dwight Eisenhower, ever likeable, then supreme commander of the Allies. But director Gerry Gregg’s effort is to locate individual contributions within it, while outlining the sprawling implications for intelligence, military command, seapower and airforces.

Like a weather forecast itself (then more art than science), the documentary makes its own observations, considers a vast interplay of wider factors, and provides the best analysis possible.

It’s humbling to hear Cattini recalling a fatigued and wave-tossed infantry, wondering: “What they were thinking, sending us out on a storm-ridden day like that?” They were actually putting their trust in each other, availing of the best window of time to win the war. While the show doesn’t dwell on its immense human cost, Eisenhower’s granddaughter, Susan Eisenhower, does reflect pointedly on the worth.

How sobering to hear those words on the day the current US president brought words of walls and retreat from west of Ireland to Normandy. “At least the day was fine,” Cattini recalls of the landing. Some people, it is worth remembering, spread the right messages.