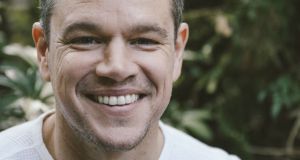 Locked down in Dublin: Matt Damon appeared on Spin 1038 to talk about being stranded in Ireland. Photograph: Elizabeth Weinberg/New York Times

It’s surely the scoop of the season: two local-radio presenters beat the rest of the Irish media to uncover the answer to the question people have been asking since lockdown began: what did Matt Damon have in that SuperValu bag?

Ever since the Hollywood star prompted online speculation after being snapped in Dalkey with a plastic shopping bag in his hand, Graham O’Toole and Nathan O’Reilly, presenters of the breakfast show on the Dublin station Spin 1038, have been appealing for him to contact them. Today the efforts of this latter-day Woodward and Bernstein pay off spectacularly, as Damon joins the duo on their weekday show, Fully Charged.

Even by the softball standards of celebrity interviews it’s a genially soapy encounter. The presenters sound so awestruck they initially struggle to talk sensibly. “Matt, I honestly feel like I’m about to throw up, that in a few seconds I’m going to wake up naked with drool on my pillow,” says O’Reilly, by way of welcome.

If Damon is disturbed by this image he doesn’t show it. (He’s an actor, after all.) Instead, in what must be a blow to Morning Ireland’s prestige, Damon reveals he was listening to the Spin duo’s larky breakfast show in the car a month ago when he heard them asking him to call, only to forget the phone number.

Half expecting him to ask me for a euro for the hostel. pic.twitter.com/ykX6EHBFWH

Such revelations aside, much of the interview is devoted to how Damon is surviving being stranded in Ireland. Unsurprisingly, he’s doing okay, given that he’s living near the sea in the most affluent neighbourhood in the country. In fact, one begins to wonder if Damon is currying favour with Dalkey’s tourist board, so glowing is his praise for the south Dublin village, although he does say he feels guilty at being in such beautiful surroundings.

O’Reilly recounts that local residents are so protective of the visiting star that he was kicked off a Dalkey Facebook page he had joined in an effort to discover Damon’s whereabouts. Of course, it’s possible that déclassé outsiders are barred from the group anyway.

As for the SuperValu bag, it turns out it was holding towels for a trip to the beach with his kids, a prosaic answer that causes mild deflation with his hosts. “Everyone thought you were going to the craziest session ever,” says O’Reilly.

Having got what they came looking for, the presenters make small talk about other minor matters, such as the health of Damon’s family during the pandemic. It turns out that his eldest daughter, a student living in New York City, actually caught the virus; she has, thankfully, recovered. The actor also expresses admiration for Taoiseach Leo Varadkar’s (slight) return to medical practice, inadvertently triggering a potential constitutional crisis by calling him our President.

Oddly, there’s not much talk about Damon’s film career, with the notable exception of Contagion, his prescient 2011 movie about a global pandemic. “Anybody who says you couldn’t predict this, just look at Contagion,” he says. “Ten years ago we made a movie just by talking to experts and asking how would this look.” Of course, those were the far-off days when people looked to experts for advice in a crisis, rather than to memes on social-media feeds.

It’s the closest that Damon, often noted for his social conscience, comes to political commentary. But while it’s a light and breezy interview, it raises the spirits, providing brief escapism with its glimpse of how the famous are faring during the crisis. (Reasonably well, it seems.) Damon also underlines his good-guy status when one of his fans, Anaïs, joins him on air: he sounds as impressed by the fact that she works as a nurse as she does by the fact that she’s talking to the star.

Of course, kudos is due to O’Reilly and O’Toole for getting Damon on to their show. By the end of the programme they are basking in the attention their interview is attracting, sounding excited that big-name broadcasters like Pat Kenny are talking about them. Most of us may be stuck in lockdown, Damon included, but at least the Spin presenters are enjoying a breakout moment.