‘She was a brilliant journalist who shied away from celebrity,’ says Miriam O’Callaghan 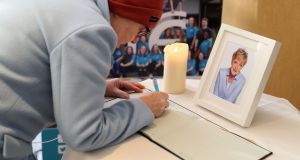 Tributes continue to pour in for RTÉ broadcaster Marian Finucane, who has been described as a “trailblazer” and formidable presence on Irish radio.

She had just returned from a holiday in India where she attended a friend’s wedding, and she was due to resume her Saturday and Sunday morning shows this weekend.

Head of RTÉ Radio 1 Tom McGuire said the station learnt on Thursday that she had died in her sleep in her Co Kildare home after the production team made a routine call to check on preparations ahead of Saturday’s show.

Two books of condolences have been opened, one at the reception of the RTÉ Radio Centre in Donnybrook and another at the Kildare County Council offices in Naas.

On Saturday morning, a special version of The Marian Finucane Show presented by Rachael English will air on RTÉ Radio One. The two hour programme will feature tributes from Ireland and around the world from colleagues and friends, reflecting on Finucane’s best moments in broadcasting.

Regular stand-in presenter Brendan O’Connor will front the show on Sunday morning. A decision on future arrangements has yet to be made by RTÉ.

On Friday, RTÉ presenter Miriam O’Callaghan said Finucane “was the most wonderful broadcaster, her importance cannot be over estimated, she was a trailblazer”.

“Her interview with Nuala O Faolain was the best I have ever heard,” O’Callaghan told Newstalk Breakfast.

“She was a brilliant journalist, but was not interested in the celebrity side, she shied away from it.”

Former president Mary Robinson told RTÉ radio’s Morning Ireland that Finucane had an empathy and commanding tone and the questions she asked were astute and very honest.

“She had an amazing capacity to draw people out. It’s a skill to be a great listener,” she said.

Ms Robinson said that the Women Today programme had courageously spoken out on issues for the first time, including when Finucane accompanied an Irish woman who travelled to the UK to have an abortion. “That was something people didn’t want to listen to,” said Ms Robinson.

Ms Robinson said: “She always moved agendas, she just went on blazing that trail, she wasn’t afraid of church or State.”

Minister for Finance Paschal Donohoe has said his abiding memory of Ms Finucane was of her studio desk covered in newspapers, he wondered how order could come from something that looked so chaotic, but it always did.

She had a deep fluency, a great work ethic and a professional attitude, he told Morning Ireland.

Charity chief executive Niall Mellon on Friday said that the foundation set up by Marian Finucane and her husband has provided meals to over two million children over the past 18 years.

The charity, based in the Eastern Cape province in South Africa, was set up to care for orphans and children in need following the death of the couple’s daughter.

“Marian and John became my heroes in how they managed their pain to help other children,” Mr Mellon told RTÉ radio’s News at One.

Head of RTÉ Radio 1 Tom McGuire said a routine call was made to Finucane at 3pm on Thursday to check she was ready for her programme on Saturday.

“There was no reply from Marian’s mobile. We didn’t think anything untoward at the time, we would just check back later. And then the call was repeated at sometime after half past three and her dear husband John answered Marian’s phone, and it was then discovered that Marian had died in her sleep,” Mr McGuire told RTÉ’s Today with Seán O’Rourke.

Aonghus McAnally, speaking on Newstalk Breakfast, said: “She had an extraordinary ability to get the best from people, her empathy, people opened up to her.

“What a trailblazer she was for women in broadcasting.

“She was a listener and had curiosity, empathy and a sense of humour and had no trouble poking fun at herself.”

On the same programme, communications expert Terry Prone said Ms Finucane will be remembered most for the “absolute reasonableness” in the way she approached an interview.

“Even after a tough interview, you went away knowing she was fair. She didn’t talk nonsense or want to hear nonsense,” he told Today with Sean O’Rourke.

“Marian Finucane made an immense contribution to Irish broadcasting,” said Mr Dooley. “A pioneering journalist she brought grace, skill, charm, curiosity and wisdom to her work but her outstanding quality was empathy.”

Doireann Ní Bhriain, who worked with Finucane, said that the late broadcaster was “equipped to handle every story”.

“She had an incredible brain, a huge curiosity. She could connect with people. She didn’t have a broadcasting ego, she was very private and wasn’t interested in celebrity culture,” she said.

One of the first producers of the Women Today programme, Betty Purcell, who was a close friend of Finucane, said that the late broadcaster had a “steely side” and she knew the importance of the women’s movement.

“She wasn’t an idealist, but she was committed and brave and strong. She was courageous as well as skilled. We always felt she had our back,” she said.

The National Women’s Council of Ireland (NWCI) paid tribute, mourning what it said was “the loss of one of Ireland’s most respected and admired feminists”.

Broadcaster Joe Duffy also paid tribute on Friday, highlighting Finucane’s “empathy, her voice, her sympathy, the trust people had in her”.

“People felt they would get a fair hearing from her. People had an instinctive trust in her voice. Her anger, her emotions were real, her disdain was real when it came,” he told Newstalk Breakfast.

Former taoiseach Bertie Ahern said: “In difficult times, the programme to go on was Marian’s. She had that calm voice. You could clearly see that she was following an issue all week, she had a deep knowledge of issues, she sounded all relaxed, but she was tremendously detailed.”

Chief executive of the Dublin Rape Crisis Centre, Noeline Blackwell, told Newstalk that Finucane “was a trailblazer, when she spoke out on women’s issues, she made a mark way outside the world of broadcasting.”

President Michael D Higgins led tributes on Thursday evening following the announcement. He said the country had lost a “deeply respected, trusted and much loved broadcaster” who had become central to her profession.

Dee Forbes, RTÉ director general, described her as a person “of immense capability; a household name, she was first and foremost a tenacious journalist with a zeal for breaking new ground”.

She said: “Multi-skilled, she forged a distinguished career on television, as well as undertaking significant charity work in Africa. Ireland has lost a unique voice. RTÉ has lost a beloved colleague.”