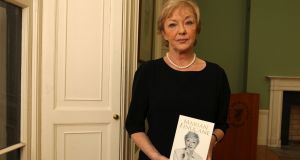 Marian Finucane died suddenly on Thursday at home, aged 69. Here are some of her memorable quotes and broadcasting moments.

Junior minister Joe Jacob gave a car crash interview to Marian Finucane about Ireland’s preparedness for a nuclear accident following the events of 9/11 in New York. The interview exposed Mr Jacob’s lack of knowledge when it came to a hypothetical attack of an aircraft striking Sellafield nuclear plant and where the public would get their iodine tablets. He subsequently resigned.

Joe Jacobs: “First of all, Marian, I am very qualified to talk to you about nuclear issues and I have done so and I hope it has had the desired effect. I am not qualified to talk to you about what the question you have asked except to say that there is, in the aftermath, first of all it’s highly unlikely and it was considered highly unlikely that as a small nuclear country Ireland would be targeted in such a way.”

Marian Finucane: “I presume as a small neutral country.”

Mr Jacob: “I beg your pardon, I have got nuclear on the brain now, a small neutral country.”

April 13th, 2008: Marian Finucane carried out a celebrated interview with her friend Nuala O’Faolain who had just been diagnosed with incurable cancer.

Nuala O’Faolain: “Yeah, I was just reading about some best-selling man who says ‘Live your dream to the end’ and so on and I don’t despise anyone who does, but I don’t see it that way. Even if I gained time through the chemotherapy it isn’t time I want. Because as soon as I knew I was going to die soon, the goodness went out of life.”

O’Faolain went on to list some of her regrets in life.

“I don’t know, to me it seems the most terrible thing. I would have been a terrible mother. My mother was a terrible mother and I was very close to her and I drank too much ‘til I was 40, which was a waste of my one and only life. The whole family, family life was predicated on drink. We’d meet our father in a pub or our mother in a pub, everything was done through a pub.

Nobody realises until they move outside Ireland just how abnormal Ireland is that way. If I had my life again I wouldn’t drink and I, of course, I wouldn’t smoke and I would try to think better although where drink would get me I don’t know. Its about 16 years since I had a cigarette.”

October 2008 Interview with former chairman of Anglo Irish Bank Sean Fitzpatrick shortly after the State had issued the bank guarantee.

Marian Finucane asked him :“Where were you on Monday night?” “I was at home,” Sean Fitzpatrick replied. “I was out for dinner with a friend of mine so I got home about half nine. I watched some TV and went to bed about 11 o’clock.” She asked if he spoke with the bank that night. Mr Fitzpatrick said he slept through the phone ringing and awoke at 6am. She reminded him that while he ate, Anglo’s shares were down 46 per cent on the day. “Any indigestion?” she asked.

Marian Finucane gave an interview to Kathy Sheridan in The Irish Times:

On her relationship with her bosses

“I’ve never experienced sexism directed at me - ever. I never had a difficulty with men. I hate to say it but I’ve just had great difficulty with women bosses . . . I don’t know what it is and it broke my bloody heart that I just didn’t get on with my first two women managers. [The other was Helen Shaw. ] Of course it’s all changed now. . . Claire Duignan’s in charge now and is a friend of mine. Maybe it was an accident of those particular people and just a personality clash. . . I don’t know.”

“From my perspective it was what the market was, because I’d had offers from other stations . . . I always said that Century Radio did me the biggest favour of anybody in the world [by trying to poach her from RTÉ]. And anyway - why shouldn’t the girls get it if the boys are getting it?”

“Do I tweet ? On a personal level? Out of the question. I cannot understand this compulsion to let the whole world know your life or your thoughts.”