With a career spanning almost five decades, the radio presenter was at the vanguard of media and social change 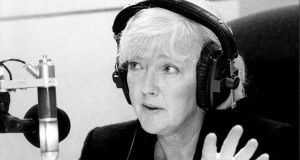 Marian Finucane: Her most memorable interview was with her great friend, the writer Nuala O’Faolain, in 2009, when O’Faolain was terminally ill with cancer.

Marian Finucane, one of the country’s most respected and influential broadcasters, died suddenly at her home on Thursday. She was 69. Over the course of a career spanning almost five decades, she was at the vanguard of media and social change in Irish life, in particular when it came to the position and rights of Irish women. For millions of listeners across generations, her voice was as familiar as that of close family members.

While she presented various TV programmes over the years, Finucane was at heart a fine radio presenter, with a keen sense of the possibilities of that medium. She co-created one of RTÉ’s most successful formats in her role as the first presenter of Liveline, a phone-in programme with a particularly Irish sensibility that remains one of the country’s most popular.

Like all great broadcasters, Finucane made the job seem effortless to the listener

After many years on Liveline she went on to anchor several other flagship daily programmes, before moving in 2005 to present The Marian Finucane Show on Saturday and Sunday mornings, which would be her broadcasting home until her death.

Like all great broadcasters, Finucane made the job seem effortless to the listener, but she had a keen sense of the dynamics required for an insightful, engaging programme. She was particularly adept at the one-to-one interview, where she balanced empathy and humour with a dogged pursuit of the heart of the matter under discussion.

Her most memorable interview was with her great friend, the writer Nuala O’Faolain, in 2009, when O’Faolain was terminally ill with cancer. It remains an extraordinary, heartbreakingly intimate piece of work, among the greatest of its kind.

Educated at Scoil Chaitríona in Dublin, Finucane trained as an architect in Bolton Street and first came to public attention as a protester against the destruction of Georgian Dublin by developers in the late 1960s. She moved from architecture into full-time broadcasting in 1974 as a continuity announcer with RTÉ.

Her first job as a presenter was on the radio books programme Paper Chase, and she then became a reporter on Day by Day. In 1979 she began presenting the radio programme Women Today, which brought issues – such as reproductive rights, employment discrimination – to the forefront of public debate through women’s voices in a way never seen before. It was in many ways a harbinger of the future of the country.

Over the last 15 years, under her stewardship, weekend morning radio, previously regarded as a graveyard slot, became hugely popular, with The Marian Finucane Show regularly ranking among RTÉ’s most listened to shows. She relished the fact that she had spotted the trend towards weekend listening before anyone else in RTÉ.

She was defiant about her fee from RTÉ, which at the time was more than €500,000

“Everyone still thought I was mad,” she told Kathy Sheridan in an Irish Times interview in 2010. “Yes, it was my idea. And now it has a higher audience than the morning show does.”

In the same interview she was defiant about her fee from RTÉ, which at the time was more than half a million euro (it was reduced subsequently to €300,000). “From my perspective it was what the market was, because I’d had offers from other stations,” she said. “Plus several serious offers since, which RTÉ somehow got wind of. And anyway – why shouldn’t the girls get it if the boys are getting it?”

RTÉ chairwoman Moya Doherty described Finucane as “a pioneer in women’s broadcasting” and said she was “rightly renowned for her fearless yet human interview technique. RTÉ has lost another great champion and another great talent, but we are the richer for having known and heard her work”.

She is survived by her long-standing partner, John Clarke, whom she married in 2015, and their son Jack. Their daughter, Sinead, died in 1990 at the age of eight.