Broadcasters and commentators remember the RTÉ DJ, who has died aged 85 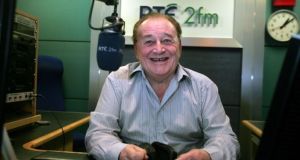 Larry Gogan has died at the age of 81. Photograph: Eric Luke/The Irish Times

Tributes flowed after the death of veteran radio DJ Larry Gogan, with affection and admiration for the Just-a-Minute man.

Gogan was universally regarded as a gentleman. In an interview with Claire Byrne last year he said: “My take on life is I’m a happy-go-lucky kind of a person; I’m very lucky to be like that. I don’t feel antagonism towards anybody and I seem to get on very well with people. So I’m quite happy as I am. I’ve always been the same, I think, and I don’t put on anything because I think people can see through you. So I think I’m just... I am as I am.”

President Michael D Higgins extended his condolences to Gogan’s family, and said the broadcaster had an indelible impact on Irish music and promoted up-and-coming and more established Irish musicians.

“Blessed with one of the warmest voices in Irish broadcasting, Larry Gogan not only defined RTÉ’s coverage of music, but also shaped the mould for many generations of DJs,” Higgins said.

The President said Just A Minute, which was renowned for some of the incorrect answers suggested, will “live in the minds of Irish people everywhere”.

Bob Geldof of the Boomtown Rats spoke of how important Gogan was to young Irish bands for supporting, encouraging and promoting them.

“If it was a good song and he liked it, he was behind it. He put the wind in your sails.”

The Band Aid founder said how the passing of Gogan, in the wake of the deaths of Marian Finucane and Gay Byrne, represented the “culling” of a whole generation of voices “that still resonate in your head”.

The Boomtown Rats song Like Clockwork was the first song played on the newly founded 2FM by Gogan. “It was a source of pride for him.”

Geldof said that, for rural Ireland of the late 1970s, Gogan was “a lifeline to the contemporary”.

Such sad news #RIPLarry We were so obsessed as kids by the #JustAMinuteQuiz (my brothers won a trophy & a fiver aged 14 & 15) that on my 1st day working in RTÉ Donnybrook I ‘met’ Larry in the canner. Chatted away like I knew him. Thought I knew him. He played along❤️ #LarryGogan

Larry Gogan RIP From ‘Just A MinuteQuiz” to the Golden Hour Larry was the soundtrack of our lives from the 1960s-2020s.I visited him ten days ago , he was in his usual great form with his loving family,his beautiful honeyed voice,the quick wit and deep intelligence shone through

Larry Gogan was a legend & a genuine national institution. He transcended generations–whether it was a hilarious moment on the Just a Minute Quiz, the breakneck countdown of the weekly top 40, or the first play of a Christmas song.We will miss you Larry.#RIPLarry #2FM

“Larry didn’t intellectualise music, he would just want to introduce us to this.

“Who else could give you a shot? That was Larry. He represented what the people felt.”

Gogan’s friend and colleague Ronan Collins, speaking on RTÉ Radio 1’s Ryan Tubridy show was audibly upset by the news, explaining they had been friends for many years : “Larry wasn’t [just] professionally happy. He was personally happy. He loved music. He never broke it down into categories. He always had his own voice, and what a voice.”

Joe Duffy tweeted that “From ‘Just A MinuteQuiz’ to the Golden Hour Larry was the soundtrack of our lives from the 1960s-2020s. I visited him ten days ago, he was in his usual great form with his loving family, his beautiful honeyed voice, the quick wit and deep intelligence shone through.”

Duffy said Gogan had been the voice of the “new swinging Ireland”; he had loved that his name was referenced in Roddy Doyle’s The Commitments; and he was chosen by RTÉ to broadcast in the event of problems with the Millennium Bug.

“He was the first person at RTÉ that visitors wanted to meet and he always had a welcome for everyone. You didn’t have to meet him in person to know he was a nice person, it was in his voice.”

‘Genius with a link’

Head of RTÉ 2FM Dan Healy, on Morning Ireland, described Gogan’s voice as amazing and one that had never aged. He was “a huge part of the foundation on which 2FM was built. He was, arguably, the greatest music DJ in Irish broadcasting history; that gorgeous voice; that genius with a link; that love for the music. Larry won all the major radio awards in Ireland but over and above them all he had the one that mattered most: universal popularity. Everyone loved Larry, and we’ll all miss him deeply.”

One of the founding producers of 2FM, Ian Wilson said Gogan had been “a total gentleman” who was “a complete genius at radio”.

Some people seemed to consider the job of presenting a music show as easy, but he defied anyone to do so as well as Gogan. “He was unique.”

Wilson said Gogan loved meeting people at outside broadcasts. “Everyone had a story associated with him. People thought they knew him personally. He was unfailingly polite, but he was also his own man and no fool.”

RTÉ director general Dee Forbes said “Larry Gogan had an impact on me and my generation, he was a true gentleman, with a kind word for everybody. He will be sorely missed in the Radio Centre, in RTÉ and in the country. He was a legend, we will remember him with fun and joviality, which is what he would have wanted.”

Gogan’s colleague Marty Whelan was on air on Lyric FM when he heard the news. He said “He was such an integral part of 2FM, he had one of the biggest hearts. He was very genuine and very honest about what he did. He always got the U2 interview because he was always a great supporter of them all the way through. He was a great supporter of Irish music. There are people who have careers because of Larry, he would really push somebody, he would champion people. You always had a wonderful time with Larry, we had the best of fun at Eurovision, he was the best raconteur.”

Broadcaster Rick O’Shea, who worked with Gogan for 19 years, said he “never heard him once mess up a link. The smoothness of his voice, he was seamless and flawless in what he did. I think he will be happy that he worked right up to the end in a job that defined him and made him happy. Larry had no ego at all. He wasn’t comfortable with other people telling him what an extraordinary broadcaster he was.”

National Union of Journalists Irish secretary Séamus Dooley tweeted that he had “met Larry going in to Radio Centre only a few months ago. Using a walking frame he looked tired as he navigated the steps. However at reception he suddenly became animated as he talked about music to colleagues. Larry lived for music and RTÉ.”

Broadcaster John Creedon posted a photo of Gogan with his late wife Florrie. “Hard to believe we have lost another legend of the trade. #LarryGogan, always a gentleman and a gentle man. Reunited with his beloved Florrie (A loyal partnership from 15 years of age).”

Journalist Flor Mac Carthy recalled “We were so obsessed as kids by the #JustAMinuteQuiz (my brothers won a trophy & a fiver aged 14 & 15) that on my 1st day working in RTÉ Donnybrook I ‘met’ Larry in the canner. Chatted away like I knew him. Thought I knew him. He played along.”

Ann Marie Kelly, Midlands 103FM presenter and documentary-maker, described him as “The only man who Larry Mullen would be interviewed by. I was lucky to have met him a few times and he always smiled and came close to say hello. His warmth and heart always came through the microphone. His genuine persona will be sadly missed on the airwaves.”

Today FM DJ Declan Pierce “I’ll never forget the day Larry Gogan was on after me on @RTE2fm. Before my own show had started I saw him arriving for work... over 3 hours early! This wasn’t just a music show, it was serious business and he adored it. I was insanely starstruck. RIP, Larry. A gent.”

Belsen: Our Story. ‘There must be a purpose in surviving. Mine is to speak about it’
10