Larry Gogan, ‘the greatest DJ of them all’, laid to rest in Dublin 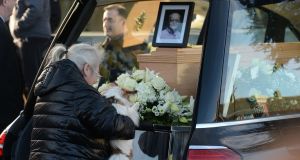 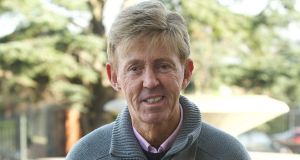 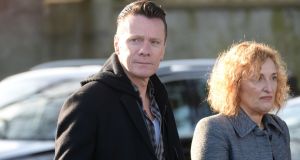 Larry Mullen from U2 and publicist Lindsey Holmes at the funeral of RTÉ Radio presenter Larry Gogan at the Church of St Pius X, Tempelogue, on Friday. Photograph: Alan Betson/The Irish Times 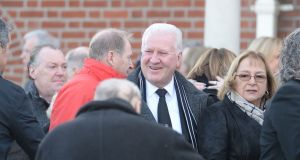 There was no eulogy at Larry Gogan’s well-attended funeral on Friday.

But at the point in the service when one might have been expected, the void was filled by a sublime rendering of One, U2’s anthem-like hymn to humanity and spirituality.

The song and its soaring, spine-tingling delivery perfectly encapsulated both the funeral and the life celebrated. It was sung by soprano Rachel Goode, a niece-in-law of Larry Gogan’s daughter Orla, who was accompanied on piano by Maria Geheran.

And sitting among the 800 or so mourners, listening and watching, was U2’s Larry Mullen, a good friend of the late RTÉ DJ who was known for championing up-and-coming Irish bands.

Gogan died on January 7th, aged 85. He was predeceased by his wife Florrie but is survived by his children, Gerard, Orla, David, Grainne and Sinead, together with their families, who include 12 grandchildren, his sisters Marie and Eileen and his brothers Tom and Niall.

The broadcaster was “a man who was incredibly popular and incredibly humble at the same time”, said chief celebrant Fr Brian D’Arcy, adding that the DJ, who had a career at the top for almost 60 years, was “one of the loveliest persons any of us had the privilege of knowing or working with”.

Almost every seat was taken inside the cavernous St Pius X church in Templeogue, Co Dublin, to hear Fr D’Arcy describe his friend and sometime broadcasting colleague as “the greatest DJ of them all”.

Symbols brought to the altar and placed beside the plain wooden coffin included a thesaurus, reflecting the late DJ’s love of the daily newspaper crossword; a set of somewhat battered headphones (“they’ve heard every pop song for 59 years,” said Fr D’Arcy); a photograph of Larry with his 12 grandchildren; a packet of wine gums (he had a sweet tooth, apparently, of which the grandchildren took full advantage); the Daily Star newspaper (Larry and Florrie loved a regular fix of showbiz news and gossip, said Fr D’Arcy); and finally, a photo of the couple (soulmates, said the priest).

Larry was an extraordinary man who was also very ordinary. He loved his family and was adored by everyone

Fr D’Arcy urged all present to be kind to themselves, to take time out for a little walk, or a look at the sunset or to listen to some music.

“He brought happiness wherever he was,” Fr D’Arcy said in his homily, adding that Gogan himself had been “as happy as . . .” The priest paused but did not deliver the infamous (and fictional) Just a Minute quiz punchline, saying instead, to the relief of the giggling congregation, “as happy as Larry”.

“Larry was an extraordinary man who was also very ordinary . . . He loved his family [and] he was adored by everyone. We all knew he was the greatest DJ we were ever likely to know.”

He asked the congregation, rhetorically: “Weren’t we very lucky to have lived with him?” Larry, “the greatest DJ of them all”.

“It is most certainly the end of an era,” said Fr D’Arcy, delivering something of a rock ’n’ roll moment himself by commenting, “nobody gets out of here alive.”

Gogan’s daughter Orla said her father was “never negative” and “his motto was ‘there is always a solution’”.

“We’ve lost the king of our family – the coolest Dad and granddad. We loved him so, so much,” she said.

Gogan’s remains, later interred privately, left the church to the strains of Bring Him Home from Les Misérables.