TV review: Five minutes of the star’s $20m series will cure your Bieber fever for good 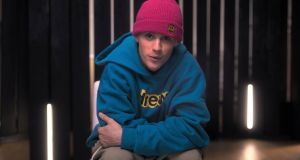 Justin Bieber: Seasons: the focus of the $20 million YouTube series is the singer in his beanie

Justin Bieber has, by most people’s standards, lived an interesting life. He became a global superstar at 13. He was once detained for trying to smuggle a monkey into Germany. A tattoo of Jesus is splodged down his left leg. The entire world has seen those Instagram snaps of his bum.

So why does his day-to-day existence, as captured in his new YouTube documentary, Justin Bieber: Seasons, feel so tedious? There’s no bum. But he does seem so terribly bummed out. There are numerous shots of the now 25-year-old sloping through characterless recording studios or trying to pull off the apparently torturous feat of laying down vocals while wearing an oversized beanie hat. His eyes are always dim, the backgrounds lustreless and dingy. Five minutes in and you may conclude that you made the correct decision by not becoming an international pop star.

Michael Ratner, the director of this 10-part series, treats us to quick interviews with Bieber’s producers and team. All are clearly terrified of falling out with their employer, godhead and reason for existence. One middle-aged engineer describes being at weekend family barbecues only to receive a text from Bieber and then dropping everything to dash to the studio. It is no way for anyone over the age of 15 to live.

In the recording booth Bieber pulls faces as if to suggest that adding a falsetto top line to Yummy, his recent hit, is an ordeal on the level of Kurt Cobain belting out the chorus to Scentless Apprentice

Seasons takes it as a given that you are deeply invested in Bieber as a musician, media phenomenon and human being. And that you have been counting down the days until he returns to live performance. The conceit is that we are peeking over Bieber’s shoulder as he plots his grand comeback, having burnt out and called short his 2017 world tour. There is bonus glamour, moreover, in the form of his wife, Hailey, supermodel, influencer and daughter of lesser Baldwin sibling Stephen.

Bieber can come across as rather strange – and, whether or not that was the intent, it is something the new doc picks up on. Irish fans may recall the 2016 3Arena concert where he called a temporary halt to the performance because fans were flinging tokens of affection on to his “ego ramp”. He barked something about “health and safety” and then began swabbing the stage with a towel. It was just as surreal as you would imagine Justin Bieber wiping down a stage with a towel to be.

That same, almost Alan Partridge-style obliviousness comes to the surface here. In the recording booth he pulls faces as if to suggest that adding a falsetto top line to Yummy, his recent hit, is an ordeal on the level of Kurt Cobain belting out the chorus to Scentless Apprentice. There are, it is true, occasional glimpses of something deeper, such as when he and his wife travel back to his hometown, in Ontario. He is surprised that the tumbledown apartment where he spent his childhood has been refurbished and recalls how self-conscious he was about growing up poor.

But these are mere glimmers. The focus is the studio and on Bieber in his beanie looking in tremendous pain. YouTube has made the first bite-sized episode available for free. (Each instalment is about 10 minutes long.) You’ll have to sign up to the premium service to see the remaining nine. It’s unthinkable that anyone apart from the biggest Bieber fan would regard this as value for money. (Don’t tell YouTube, but I will be cancelling after my free trial.) Even more unthinkable is the idea that YouTube coughed up $20 million for the rights to this solipsistic snoozefest. The best that can be said for it is that it will cure your Bieber fever for good.