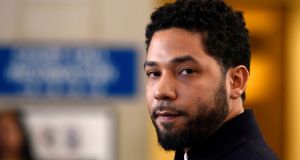 The TV actor Jussie Smollett has been indicted by a special prosecutor on six counts accusing him of lying to Chicago police – almost a year after similar charges against him relating to an alleged hoax attack were dropped amid outcry from many sides.

Tina Glandian, Smollett’s attorney, did not immediately return a call for comment.

Prosecutors last March agreed to drop criminal charges against the Empire actor Smollett for apparently faking a hate crime attack in Chicago, a decision which at the time drew claims from then mayor, Rahm Emanuel, of a “whitewash of justice”.

Smollett had earlier in 2019 been charged with 16 counts of felony disorderly conduct for allegedly hiring two men to stage a racist, homophobic attack against him in downtown Chicago.

After being arrested in January 2019 and accused of staging a hoax, Smollett later said: “I have been truthful and consistent on every single level since day one. I would not be my mother’s son if I was capable of one drop of what I’ve been accused.”

He went on: “This has been an incredibly difficult time, honestly one of the worst of my entire life. But I am a man of faith, and I am a man that has knowledge of my history, and I would not bring my family, our lives or the movement through a fire like this. I just wouldn’t.”

The actor, who is gay and black, had said he was walking home from a sandwich shop in downtown Chicago at about 2am on January 29th when two men approached him, shouting racist and homophobic slurs, beat him up, poured bleach on him and looped a rope around his neck.

But shortly afterwards, Chicago police held a dramatic news conference, accusing Smollett of a hoax. Police said he faked the attack because he was unhappy with his salary and wanted to drum up publicity to help his career.

On Tuesday, the news emerged that Webb had indicted Smollett and the actor is due in court on February 24th.

A judge in August appointed Webb, a former US attorney, as a special prosecutor to look into why the original charges were dropped.

Webb also was looking into whether calls that Kim Foxx, the Cook county state’s attorney, had with a Smollett relative and an ex-aide of Michelle Obama had unduly influenced the decision to drop charges. Foxx recused herself from the case but continued to weigh in.

The city has sued Smollett, seeking reimbursement of more than $130,000 (€119,000) for overtime paid to officers who were involved in investigating Smollett’s report.

Smollett’s attorneys have said the city should not be allowed to recover costs from Smollett because it accepted $10,000 from the actor “as payment in full in connection with the dismissal of the charges against him”.

Smollett’s case has become an issue in Foxx’s bid for a second term. Her opponents have pointed to the case as indicating she has bad judgment and favours the rich and powerful in deciding who will be prosecuted. – Guardian