Eurovision: Europe Shine A Light TV review. It feels held together with duct-tape, but its heart is in the right place 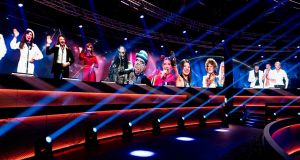 With the coronavirus pandemic persisting longer than even the typical Eurovision power ballad, the inevitable has come to pass.

The song-and-dance jamboree that gave the world Abba, Dana and - wow, the Eighties were bleak weren’t they? - Bucks Fizz has been postponed until 2021.

To keep us from rioting, the pop deities are instead fobbing us off with Eurovision: Europe Shine A Light, aka the Eurovision Non-Contest (RTÉ One).

This sounds like a slightly desperate stop-gap. But then you remind yourself it will feature Johnny Logan singing What’s Another Year in a suit so white that when stared at directly it’s as if you are gazing into God’s own linen basket.

Eurovision: Europe Shine A Light is classic lockdown telly. There is no audience and just three presenters, speaking from what would have been the 2020 host city of Rotterdam (the venue where the event was to take place is now, and rather inevitably, a Covid-19 hospital).

They grin goofily and stand two metres apart. Everyone else joins via Zoom. Apart from the aforementioned Logan who, by dint of his status as Grand Daddy of Eurovision, has an entire TV studio to himself.

On international Twitter, people reckon he looks like a cross between Julian Assange, Kenny Rogers and Hulk Hogan. At least nobody mistakes him for Dickie Rock.

As holding manoeuvres go, the two-hour broadcast feels held together with duct-tape (the satellite link-up delays are especially excruciating). Its heart, though, is in the right place.

It isn’t the Eurovision obviously.

But it feels…Eurovision-y? We meet the contestants, with their perfect teeth, imperfect songs and imaginative hair. They tell us they love us, we’re all in this together and that we should keep our spirits high by listening to their music.

In bonus good news, the dreaded elimination semi-finals have been jettisoned. Instead, all 400 contestants (I’m pretty sure that’s how many songs we sit through) have a brief - and it is very brief -moment on the spotlight.

These include Ireland’s Lesley Roy, who says hello from New York. We’re back where we belong: on Eurovision on Saturday night.

As is Marty Whelan, whose voiceover is low-key but nonetheless contains many classic Marty-isms (“That song was called the Wild Wind - as you know there’s a tablet for that”).

The songs are obviously all over the place. There are power ballads, dance-floor bangers, acoustic numbers and the new genre of 'sounds like Billie Eilish'

Over all, it’s quite an Irish-flavoured affair. Logan is on at the start, accompanied by a chorus of fans singing along from their living rooms. Later, we are treated to the curious flex of Dutch TV interviewing Corkman Graham Norton, in his capacity as the voice of British Eurovision.

This is strange and probably says more about Dutch anglophilia than Norton’s standing among Eurovision devotees.

Do viewers in Azerbaijan / Estonia / San Marino etc have the foggiest who is is? Even he seems baffled as to why he’s been invited. Sandwiched in between meanwhile are appearances by Dana, Niamh Kavanagh and the Rock of Cashel (which will surely give credence to rumours that RTÉ was considering sending this crumbling landmark instead of Nicky Byrne to the 2016 Eurovision).

Eurovision in the Before Times was nothing if not fabulous. With all the contestants at home and the hosts doing their best Miriam O’Callaghan-hosting-a-scary-Late-Late-Show impersonations, the atmosphere is inevitably a bit flat.

Chantal Janzen, Edsilia Rombley and Jan Smit try hard, however. And they proceed to terrify us a tad when they join in with Johnny Logan on What’s Another Year and are revealed to have perfect singing voices.

The actual songs are obviously all over the place. From Ireland to Russia, via Australia and Iceland, there are power ballads, dance-floor bangers, acoustic numbers and the new genre of “sounds like Billie Eilish”.

But heartstrings are pulled with gusto. Abba’s Björn Ulvaeus, especially, has everyone dabbing away tears recalling the time his grandson asked if he used to be pop star.

It’s clever of the broadcasters to bring down the curtains with Love Shine A Light by Katrina and the Waves, he adds. Especially considering the obvious alternative was Waterloo - not a song we need to hear during a dystopian viral outbreak.

As billed, the evening ends with Love Shine A Light. All the finalists sing a line of a track which saw Topeka, Kansas native Katrina Leskanich win the contest for the UK in 1997.

This is Eurovision without the douze points, the block voting and contestants waving tiny flags backstage. But it’s also a reminder that,while the coronavirus can shut our schools and our pubs, it can’t stop us coming together to celebrate our shared love of kitsch pop music.

A tiny victory but at times like these let’s take them where we find them.