James Acaster: ‘There’s not much positive about being English today’

The standup discusses podcasts, Irish comedy and why 2016 was the best year for music 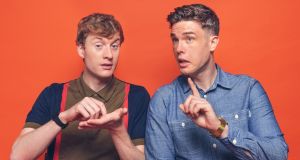 James Acaster and Ed Gamble are co-hosts of the Off Menu podcast. ‘Food is something that you can connect over, especially in these divisive times.’

In the Venn diagram of things with a renewed importance during coronavirus lockdown, Off Menu encompasses three of the biggies: food, podcasts and comedy. It’s fortuitous for James Acaster, who hosts it along with comedian and long-time friend Ed Gamble – but it’s not nearly as lucky as having planned a gig-free 2020 anyway.

On the back of the podcast, appearances on shows such as Mock the Week and Hypothetical, and a Netflix special (a watermark moment for every comedian’s career), he’d toured his heart out in 2019 and then hunkered down, writing and planning podcasts in the comfort of his and his girlfriend’s home in south London.

“I’ve been flukey, but a lot of my colleagues haven’t been as lucky, and it’s hitting people pretty hard,” he says on the phone. He doesn’t mention it but a couple of days before we speak, a live-streamed episode of Off Menu came out, with guest Richard Herring describing his dream starter, main, side and dessert for the magic restaurant (we particularly agreed with his choice of drink: “the local beer that I drink on holiday, but be able to drink it here, and it is as good”). The show came with “a tip jar” for those in comedy affected by the cancellations.

I think jokes have a huge effect on the audience who hear it, and they reinforce extremely unhelpful opinions

Since starting in December 2018, the podcast has slowly and steadily escalated in reach. Guests range from Veep writer Armando Iannucci to Fleabag actor Sian Clifford, plus comics such as Aisling Bea and Dara Ó Briain. “I think there’s only been one episode ever that I haven’t enjoyed, and that’s still come out funny,” he says. “It hasn’t gone out yet but you’ll be able to tell which one.”

In its infancy, food writer Grace Dent noted it was refreshing to have food discussed by people who’d no other links to the foodie scene (an aspect that also aids Table Manners, a podcast from singer Jessie Ware and her mother). It means that as Off Menu grew, they had laugh-out-loud conversations about everything from Michelin-star meals to the merits of various chip sauces, all with genuine interest and without judgment. Well, unless you dare to choose cheese as a dessert.

“Food is something that you can connect over, especially in these divisive times,” says Acaster (35). “If I’m at a party, and start chatting to someone and realise politically they’re opposed to me, I can say something like, ‘I’d love to try fresh fish straight from the ocean, I’ve never done that’, and we’ll start talking about food and people. Even the most horrific human beings have good opinions about food.”

The format of the show also contributes to its success. It’s a play-along-at-home scenario, made better by descriptions that reveal a person’s character and background – the Sindhu Vee episode, in which she tells anecdotes about not going to a wedding in Greece because she’s not interested in Greek food, is a classic for that.

As Off Menu bubbles away nicely, Acaster has fired up another podcast for BBC Sounds. James Acaster’s Perfect Sounds is a 50-episode niche look into the albums of 2016, debating his favourite releases with a guest comedian.

It began because with Trump and Brexit, 2016 was “a pretty sucky year” for liberal-minded folk. At the same time, “I noticed quite a lot of big, mainstream albums being released that people were going crazy for: David Bowie released Blackstar, Beyoncé released Lemonade, and Frank Ocean released Blonde. I started to get quite excited that major recording artists were still making albums – they were properly trying to make good art.”

In his personal life, things dipped the next year when Acaster and his girlfriend split up, he parted ways with his agent, and his mental health suffered. That’s when he found comfort in diving into the 2016 end-of-year lists. “I own I think it’s now over 650 albums that came out in 2016. I’d be lying if I said any other year was the greatest year of all time.”

I note the “owning” of the albums, he explains it’s because “with Spotify, there’s the whole choice paralysis you get. And if I buy an album, I’m more likely to properly listen to it because I’ve invested in it. Plus if we don’t support the artists, pretty soon, we’re not going to have much to listen to anyway.”

In a previous era, Acaster, who grew up in the middle England town of Kettering, was a musician himself. The manic energy we see in his performances, which is toned right down over the phone, was once channelled into drumming. But when half of the two-person band quit, he wandered into comedy as a low-barrier stopgap, and eventually moved to London.

“I started off strong in stand-up, because I didn’t care,” he says. “Everyone else at these open mic slots had their notebooks out, discussing how to be a good stand-up, and I was just sitting around like, ‘I don’t give a s**t’.

“In bands, we’d turn up at some pub, set up in the corner and start playing while the audience watched football on the TV. Suddenly I was in comedy clubs where, yeah, there were seven people in the audience, but they were all facing the stage and watching. The situation already felt pretty good, so I just improvised.”

It went so swimmingly that he decided to pursue it properly, “and the very first gig after that decision, I performed to complete silence, and that’s not an exaggeration,” he says. “[Motherland co-creator] Holly Walsh was on the bill at that gig, at the Red Rose Comedy Club in London. She says it’s the only time she’s watched a comedian and been 100 per cent convinced they’re not going make it.”

For the two years that followed, things didn’t get much easier. “I wanted to make my routines have some value, but I wasn’t good enough to do that yet,” he says. “As soon as you start trying to do stuff that’s beyond you, you fail a lot. Whereas before I was just doing what I was actually capable of, which is going on stage, f**king around and not caring about the content.”

Thanks to support slots with Josie Long and Milton Jones and “comedy bootcamp” of the Edinburgh Festival Fringe, his game became award-winning in the decade thereafter. We’ll have seen it in the handful of Irish shows he’s played, including the Cat Laughs festival in Kilkenny.

“There’s a long and rich history of comedy in Ireland,” he says. “Some of my favourite comedians of the last few years are Chris Kent, Eleanor Tiernan and Alison Spittle – all great new Irish comics. And throughout the ages you have people like David O’Doherty and Tommy Tiernan.

“Watching an Irish comic in Ireland is amazing – there’s much more of a shared identity,” he continues. “I remember seeing Aisling Bea in Kilkenny, and it was all material I hadn’t seen before because it was all Ireland-specific. The way it resonated with the audience was awesome.

“If I went on stage in England and talked about what it’s like to be English, it wouldn’t be that exciting to the audience. To be honest, there’s not much positive about being English today. It’s not very funny, it’s pretty rough at the moment,” he says.

In the 12 years since hanging up his drumsticks, the most notable change he’s found in the industry is the extra awareness needed – or performing for a “woke” generation, as some might put it. To Acaster, is a good comedian’s job to acknowledge contemporary comedy, regardless of their store of jokes.

“There are still people who get all grumpy, going like ‘back in my day comedy was like this’,” he says. “Yeah, that was the past that you’re talking about. I’m glad you enjoyed that in the Comedy Store in the 1980s, but now this is cutting-edge comedy. So if you really care, you should be liking this, but you don’t, because maybe you’re not as progressive as you think you are.”

He’s cautious of the “it’s just a joke” argument too. “I think jokes have a huge effect on the audience who hear it, and they reinforce extremely unhelpful opinions. And maybe it’s not just a joke if the comedian doesn’t care about repercussions of it,” he says. “Especially if you tick a lot of privilege boxes, like I do, you have to think about who the butt of the joke is. It’s better for the world in general, and it helps you write better routines, because you’re moving with the times.”

In between the podcasts and writing, Acaster is also an executive producer on a US remake of his short-lived BBC sitcom We the Jury, about a motley crew of jurors. It was picked up by CBS, given the green light for a pilot episode, and in the middle of auditions when LA pressed pause for coronavirus.

“I’ve left the show in their hands because I’m aware that if I throw my weight around, it’s not going to be very good,” he says. “There’s such a great team working on it, and I feel very lucky that I’m able to offer my opinion if it’s asked for. But yes, it’s on hold for the moment.”

If that’s the only professional impact of coronavirus, it will be a lucky escape. So here’s hoping.