‘I’m only kind of retiring,’ says Seán O’Rourke on his last day on air 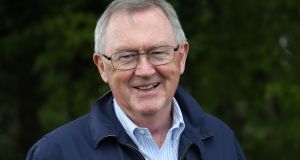 Séan O’Rourke began his career at the Connacht Tribune in the early 1970s before later moving to the Sunday Press. Photograph: Nick Bradshaw

RTÉ radio stalwart Seán O’Rourke began his last day on the air by hinting he “had a bit more in the tank” and that his retirement is only partial.

The current affairs journalist, who has hosted the Today with Seán O’Rourke morning programme on the national broadcaster for the last seven years, signed off on Friday for the last time.

It marks the completion of a celebrated media career which has seen the 64-year-old garner a reputation as a no-nonsense interviewer with a knack for drawing the most from his subjects.

“I’m not sad. I was feeling pretty good getting up this morning, but then it was like getting a bucket of cold water in the face hearing about the [coronavirus] deaths in the nursing home and all the confusion about the Leaving Cert,” he said on Morning Ireland on Friday – unsurprisingly redirecting discussion of his own retirement back toward the news headlines.

“I’m only kind of retiring ... there’s a bit more left in the tank,” he said, leaving the door very much open for a reappearance of some kind in the future.

O’Rourke bows out in the middle of what is arguably the biggest news story of his career and he praised RTÉ for its ongoing coverage saying he was “immensely proud of the job this institution is doing at this time”.

Since announcing his departure date last month, O’Rourke has received numerous on air well-wishes from his interview subjects, batting them away with characteristic modesty.

Finding the humour, he joked on air that someone had sent him €20 for a social drink once the pubs reopen.

Satirist Oliver Callan was among those on the last show and he paid tribute in the character of various political leaders. As Taoiseach Leo Varadkar, he said: “Not all superheroes wear capes. Some of them wear the ear off you over 30 years on the radio.”

The impressionist touched on an important note: O’Rourke’s career has been framed by the heavyweight political interview. An audio reel contained clips from all the contemporary party leaders as well as Donald Trump, Enda Kenny and Gerry Adams.

On his famous 2014 interview with Mr Trump, O’Rourke remembered his encounter with the tycoon shortly after he had raised the sensitive subject of his hair.

“He came into the room afterwards shouting at me: ‘Seán! I thought you were one of the good guys but you brought up the hair!”

However, the broadcaster later reflected that those he remembered the most over the years were the ordinary people, trapped in difficult positions. In particular he recalled the tragedy of the Loughinisland killing of six Catholics by Ulster Volunteer Force gunmen during a 1994 World Cup football match.

Though audibly uncomfortable at some of the tributes, he laughed along with much of the humour. Historian Diarmaid Ferriter, among his final Friday morning panellists, assured him: “I am not here to officially announce that you are history Seán.”

A message from President Michael D Higgins, in which he appeared to echo O’Rourke’s suggestions of a partial retirement, was read out on air: “I am sure we will hear from you as you enter the next chapter of your life.”

A native of Portlaoise, O’Rourke began his career at the Connacht Tribune in the early 1970s before later moving to the Sunday Press where he worked as a sports reporter.

He was a political correspondent for the Irish Press from 1984-1989 before moving to RTÉ, where he took over hosting the News at One in 1995. He has also presented TV shows such as The Week In Politics.

His move into the station’s mid-morning flagship current affairs slot was announced in 2013 following the departure of Pat Kenny to Newstalk.