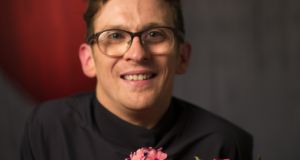 “Last Christmas as a joke my friends got a jumper that said ‘I’m gay, disabled and still have sex’. I love it. They also got me one that says ‘Gorge’. Spot the gay right?’”

It’s fair to say that Paddy Smyth stole the hearts of viewers on last night’s First Dates Ireland. After his date was broadcast, the Sutton born 28-year-old even trended on twitter. This morning he told us ‘I’ve had a little cry today too. I suppose dating has been hard because I’m afraid to show people my vulnerable side. Guys see my disability and automatically ‘friend-zone’ me. But today, for the first time in ages, I fee l quite attractive. I’ve even had a few date offers since I woke up, and a few ‘pics’ too’.

I can't believe I'm trending thank u - I got so overwhelmed with emotion I cried a little. I'm doing some interviews 2m so stay tuned. ❤

Smyth’s date with David (master’s student in UCC) got off to a bit of an awkward start, but as time went by the two relaxed into it. ‘It was so awkward at first. I mean, it’s a first date on TV. And I was nervous too. I’m such a messy eater, I’d make a mess of a Cobb salad, so I was worried I’d spill something and look all disabled in front of him.’

The new First Dates star has grown a large following on snapchat over the last year, documenting his day-to-day life living with cerebral palsy. His honest and often hilarious attitude towards his disability is a breath of fresh air, on a platform that is so often filled with picture-perfect, filtered lives.

‘On social media I’m pretty honest about what it’s like living with a disability. I show the good and the bad bits, like I get to skip queues and make people carry my tea, but yeah, dating can be tough. One of the reasons I went on First Dates was to highlight the stigma surrounding being gay and disabled.’

‘My friends always joke that all I talk about is sex, being gay and being disabled. I even call my followers on social media my ‘disablers’ (like my ‘beliebers’) so last Christmas as a joke they got a jumper made for me that said ‘I’m gay, disabled and still have sex’. I love it. They also got me one that says ‘Gorge’. Spot the gay right?’

Despite the initial nerves, the first date continued on to The George once the cameras were off. ‘We had a little kiss. He’s a lovely guy. I’d be lying if I said there wasn’t attraction.’ And will they be seeing each other again? ‘Well you never know- when I watched last night I remembered how much we got on, so maybe. And we’re still texting. But for now I’m still single- so if anyone is interested- get in touch!’