Broadcast featured music, song and dance from some of country’s most celebrated artists 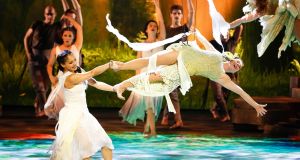 The hour-and-a-half long show filmed live from the Bórd Gáis Energy Theatre, and which also included some pre-recorded clips, was the centrepiece of the national broadcaster’s schedule of commemorations for the Easter Rising.

The show aimed to “tell the story of modern Ireland through music, song and dance”, and featured performances from artists such as singers Imelda May and Danny O’Reilly from the Coronas, and musician Sharon Shannon.

A narrative of Ireland’s modern history broken into 18 chapters, the broadcast began with a mystical song, dance and aerial acrobatics routine, and proceeded to portray an artistic re-enactment of the Rising itself and the executions of the leaders.

There were also references to the Irish involvement in World War 1, the struggle for labour rights and the emergent suffragette and Irish language revivalism movements of the time.

Actors read excerpts from the last letters of some of the condemned rebels, and this was followed by clips of Irish people and emigrants around the world reading from the Proclamation of the Irish Republic.

Although chiefly a remembrance of the Rising itself, the programme touched on other themes in the nation’s history including the ensuing War of Independence and Civil War, economic hardship, emigration, the Troubles and famous diplomatic visits of former US president John F Kennedy, Pope John Paul II and Queen Elizabeth.

There were musical renditions of Pádraig Pearse’s poem Mise Éire and Mo Ghile Mear, as well as performances of songs including The Foggy Dew, The Minstrel Boy and Grace.

President Michael D Higgins delivered an address to the audience in which he said that the centenary commemorations are about celebrating the actions of people who fought and died so that future generations could live in a free and sovereign Ireland.

Commenting on the show, singer Imelda May described it as an “honour” to take part.

“To commemorate the sacrifice those brave martyrs made for us is very important to me and my family. My own grandparents were part of this,” she said.

“To commemorate it with music, art and poetry across our country is very fitting considering that the Rising was led, not by traditional soldiers, but by poets and artists fighting with passion and pride,” she added.

There was a deluge of positive comments from members of the public on Twitter, with many congratulating RTÉ on its flagship showcase.