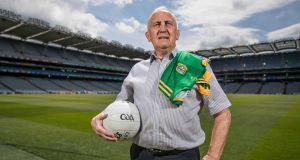 The GAA coach Seán Boylan is the subject of a new documentary that correctly abbreviates his name to Seán (Thursday, RTÉ One), in the manner of Cher or Madonna or R2D2.

What does Seán Boylan do? I don’t really follow the sports, but I’ve seen Normal People, so I feel confident I can explain this. Seán Boylan once herded wild Connells on behalf of a sentient land mass known as Meath. He was Meath’s Normal People-ball (Gaelic football) coach.

So good was Boylan at herding Connells that he kept an enchanted cauldron, or “cup”, out of the hands of the rest of us for sizeable chunks of the 1980s and 1990s, and this depressed us so much there was a recession. That’s enough context. And apologies to everyone who has read thus far.

Seán sometimes employed strange methods. He made his team run laps of the Hill of Tara to feel its energy. He got them to end gruelling runs with a headlong rush into the sea

Seán was very good at his job, and lots of people understandably love him. He comes across as a thoughtful and slightly unusual man. We learn about his father, who was enlisted in the Irish Republican Brotherhood, and that the esoteric family trade was herbalism. Boylan grew up sterilising bottles that were used for cures, and he remembers cheering Meath fans going by on the train the day of the All-Ireland in 1949. He flirted with a religious vocation, but his real vocation turned out to be in the GAA.

Softly spoken middle-aged men speak warmly and eloquently about his qualities as a mentor. He sometimes employed strange methods. He made his team run laps of the Hill of Tara to feel its energy. He got them to end gruelling runs with a headlong rush into the sea.

These are things that might get a lesser man classed as the town oddball (Meath men hate water, and some of them wanted to tarmacadam over Tara), but they were invigorated. “You felt your willy was going to fall off,” says one player, expressing a fear probably shared by contemporary Connells but for different reasons. (Normal People is still on the RTE Player if you want more details.)

This is a gentle, enjoyable documentary, and Boylan is a compelling presence. He has struggled with a tumour diagnosis. He talks about family and love and overcoming shyness. But there are things that could do with more probing. We learn very little about Boylan’s job as a herbalist. That word can mean anything from “witch doctor” (locals referred to the family trade like this at one point, Boylan tells us) to “folklorist who makes weird tea”. But we get no details, even though Brush Shiels attributes life-saving powers to Boylan’s herbalism in a song. I also feel unclear about the role religious faith plays in his life.

These tantalising details about Boylan are elbowed offscreen by a need to cram every footballing fact into the chronology. I can’t help feeling that his spirituality and herbalism must be somehow integral to his coaching practice, but here it’s filed separately. This is often a problem with RTÉ’s personality-focused documentaries: a need to be reverentially completest can defeat attempts to go deeper.

I suspect that Boylan is even more wonderfully weird than this sweet documentary lets on.