Herstory: The Limerick woman who was a pioneering aviator

TV review: A profile of a remarkable woman, but this documentary stutters more than it soars 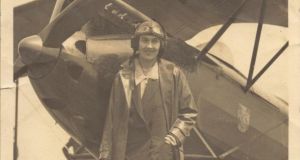 Lady Mary Heath: the first woman to hold a commercial flying licence and famous for flying from Cape Town to London in an open-cockpit plane

The first episode of RTÉ’s new series, Herstory: Ireland’s Epic Women (RTÉ One 8.30pm), sets out to rescue from obscurity the pioneering airwoman Lady Mary Heath. This it achieves, but without quite taking flight. In the end Lady Mary exits much like she arrived: a mystery gliding high overhead.

The problem is the documentary doesn’t provide sufficient social context for us to fully take stock of Heath as a figure in Irish 20th century history. We’re told she was born Sophie Peirce-Evans in Newcastle West, Co Limerick in 1896 and grew up in “comfortable” surroundings.

But what does “comfortable” mean? Was she a member of the Anglo-Irish ascendency? If not, where did the family wealth come from? And who were the aunts who raised her after her father beat her mother to death? Come to what, what happened to her father?

The haziness continues into her adult years. The documentary, which follows the traditional route of blending voiceover and talking heads, informs us that her first husband, Major William Elliot Lynn, was much older than she. Well alright, but how much older? It is also jarring to see her journey into womanhood conjured with images of carefree young things in their Gatsby-esque splendour, accompanied by a jazz soundtrack. Was there much Gatsby-esque splendour in Newcastle West in the 1900s?

Herstory is on surer ground as Peirce’s career as an aviator – the narration insisted on the anachronistic term “aviatrix” – takes flight. She was the first woman to fly solo in an open cockpit from Cape Town to London. Later, unable to find work as a commercial pilot in London she had success as a stunt flyer in America where my research informs me she was compared to Charles Lindbergh (in that she was a flying ace rather than a proto-fascist) and dubbed “Britain’s Lady Lindy” (yes, I’m triggered too).

With less than half an hour to tell her story, there is a sense of dashing from a to b, with little opportunity to tarry on essential details. She returned to Ireland and opened a flying school near Finglas. Alas, with a metal plate in her head and in the throes of alcoholism, she grew increasingly eccentric. Was there a connection between her abnormal behaviour and her father’s mental illness? If so, it is glossed over.

Instead, it’s off to London where at age 43 she fell down the stairs of a double decker bus and died, three-times divorced and profoundly obscure. And then one final disappointment as we are told that she decreed her ashes be scattered over Newcastle West to annoy a local against whom she had maintained a lifelong grudge. But who was the local – and why the grudge?

As valedictory Herstory just about stays airborne. The hope must be that it restores to Peirce some of the prominence that is her due. Yet as a profile of a remarkable woman living through remarkable times it stutters more than soars.