Hector Anseo: Hector Ó hEochagáin and a shedload of celebs

When broadcasters get bored, there’s only one thing for it: a chatshow from the shed 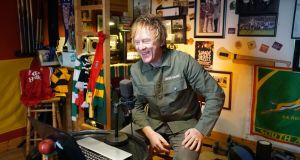 Hector Ó hEochagáin has had so much free time on his hands he even painted his dog’s kennel, so when there’s quite literally nothing left to do around the house the only thing for it is to take to your shed, fire up your laptop and do a chatshow. And with that, Hector Anseo (TG4, Thursday, 9.30pm) is born.

A highly enjoyable 60 minutes of catch-ups with an array of characters it is too, Hector checking in with a selection of the plain folk of Ireland (among them a farmer, a hairdresser, a priest and a bar owner), along with a few familiar faces, to see how they’re getting themselves through this ordeal.

Michael Healy-Rae is stoical about it all, his cat Freddie Healy-Rae less so, having been run over by a lawnmower during lockdown, but like Freddie, Michael reckons the nation will bounce back. “Better days will come,” he says.

Trevor Brennan certainly hopes so because he’s spending €500 extra a week on food in his Toulouse home now that his sons Danny and Josh are back home. The pair have followed their Da in to the rugby-playing world, both French underage internationals, so they require humongous amounts of fuel.

“We had to buy an extra ****ing fridge,” says Trevor, telling us that his lads go through 18 chicken fillets, six entrecôtes and 10 litres of milk a day. Mind you, 18-year-old Josh is six foot six and weighs 18 stone, so that’s probably just his breakfast. Other than that, everything was fine, apart, he said, from his wife Paula’s hair now looking like Hector’s, not having had it seen to in 48 days.

Paula needs a Martha Fleming in her life, the Kerry hairdresser providing the most essential of services, serving ready-mixed takeaway hair colour through a window of her house to clients whose world, like Paula’s, is crumbling because their roots are showing.

Treasa arrives with her young son who is being tasked with applying her colour, Martha demonstrating to him, with the help of a mannequin’s head, how to do it. He looks a little confused by the process, so there’s now a chance his Ma is walking around Killorglin looking like Siouxsie of the Banshees circa 1982.

Then we are off to the flats in Ringsend which are now world famous thanks to their “balcony bingo” and their socially distanced mass dance. The residents’ latest boredom-busting project was their version of Stars in your Eyes. Hector asks one of the contestants, Biffo O’Keeffe, who is sporting a false moustache, which star he is doing. “Can you not tell? It’s either Adolf Hitler or Freddie Mercury,” he says. Mercifully it is the latter, unless Hitler did a version of Radio Ga Ga in his vest and tight pants.

Back in Toulouse, Trevor is telling Hector about his Kildare-based elderly mother. Is she worried about contracting the virus? “Na,” he replies, “she says ‘I’m in the departure lounge now - if I go, I ****ing go’.” That’s the spirit.