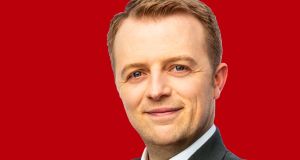 Gavan Reilly: The presenter lifts the Newstalk show beyond its limitations Photograph: Newstalk

Gavan Reilly is perplexed at what he’s hearing. With the worldwide pandemic showing no signs of declining and state health bodies urging masks be worn, there are still those who see face coverings as an affront to their liberty. Worse, with face masks being made mandatory in public, a rally is organised by fringe groups to vent hostility at the measure, only to end into chaos.

It comes as little surprise that this incident, as recounted to Reilly on his show (On The Record, Newstalk, Sunday) should have occurred in the United States, where the fight against the virus has been politicised to grievous effect. What’s more unexpected is that it happened a hundred years ago, during the Spanish Flu pandemic. In the programme’s regular “Hidden Histories” slot, historian Donal Fallon relates how an “Anti-Mask League” was formed in San Francisco in 1918, in response to strict laws enforcing face covers before unceremoniously fizzling out: the group contained both right-wing nationalists and suffragettes.

Though Reilly sounds a gently bemused note as Fallon jauntily tells his story, he’s aware of the episode’s relevance: “It’s funny how things change, and how they don’t change at all.” What six months ago might have sounded like an outlandish historical anecdote now could pass as a news report. But Reilly draws some comfort from at the preposterousness of it all. “It’s not just a 21st century phenomenon, people had the same views a century ago,” he says, though the comparison with a society emerging from one world war en route to another is hardly reassuring.

It’s an enjoyable conversation, but then Fallon’s slot is always a reliable highlight. Otherwise, On The Record is a solid if conventional current affairs magazine, carried by the host’s deceptively unassuming presence rather than high-profile guests or grandstanding face-offs. Last Sunday’s edition is a case in point. Reilly’s interviews are conducted with rigour and clarity, but could do with more spark.

Talking to Dr Nuala O’Connor of the Irish College of General Practitioners, the host asks pertinent questions – about the new tracker app, about registering with GPs – as he seeks an accurate picture of the pandemic’s current status. It’s admirably informative, but the closest thing to contention is O’Connor’s bafflement why some people delay reporting Covid-19 symptoms. Similarly, Reilly questions European Parliament vice-president Mairead McGuinness about the EU’s coronavirus financial aid package in granular detail. Such wonkishness is commendable, but doesn’t obviously grab the casual Sunday listener flicking across the dial.

There are handicaps beyond the host’s control. There’s the common Newstalk dilemma of being out-muscled by a better-resourced RTÉ: while Reilly talks policy with O’Connor and McGuinness, his Radio 1 rival Brendan O’Connor is chatting to former Ireland soccer international Tony Cascarino and novelist John Banville. Still, Reilly lifts the show beyond its limitations, thanks to his easy inquisitiveness and wry sensibility, the latter working particularly well during the show’s newspaper panel. On having guests in studio for the first time in months, he drolly comments, “What a time to be alive”. But neither Reilly’s attractive manner nor his entertaining historical spots can mask the deeper problem: without peppier guests and zingier items, his show lacks truly infectious appeal.

Lack of spark, and indeed sparkle, isn’t an accusation that can levelled at Pantisocracy (RTÉ Radio 1, Thursday), hosted as it is by the outspoken and exaggeratedly glamorous Panti Bliss. Even on the radio, it’s hard to avoid the mental image of Panti holding court in her outsize wigs and heavy maquillage. But Rory O’Neill’s glitzy alter-ego has had to adapt her interview show to fit in with current circumstances, eschewing the live audience she normally enjoys playing to. Consequently, the conversation and chemistry between hostess and guests is more crucial than ever.

Last week’s episode certainly tackles big themes. Entitled “Breaking Secrets and Shame”, the programme opens with the presenter’s customary monologue: “I’d like to take the floor because I can.” Drawing on personal experience, Panti talks about the loneliness of gay people who feel they can’t reveal their sexuality. Being “in the closet”, she says, is tortuous: “The closet is built of shame and held together by secrets”. In O’Neill’s case, a diagnosis of HIV compelled him to come out: “I have a big mouth, so I knew wouldn’t be able to keep the secret”.

As well as setting the tone, the emotionally-charged address emphasises Panti is the star of the show. She regularly brings the topics under discussion back to her own experiences, which are admittedly unusual and varied. Equally, she allows her guests to tell their stories in unfiltered fashion, making it a far more arresting listen than it might otherwise be.

So singer Jess Kavanagh talks about her late mother being born in a mother-and-baby home and subsequently adopted by her aunt, discussing how that, coupled with her mother’s mixed-race heritage, has influenced her own life and music. Similarly, as filmmaker Paul Duane recounts how he was adopted after being born in a Catholic institution, he touches on class dynamics: his middle-class birth mother got favourable treatment from the nuns. But he also outlines how secrecy and shame complicated his relationship with her when they were reunited. These experiences are told matter-of-factly, with Panti acting as nuanced foil rather than extrovert raconteur.

As for the presenter herself, she isn’t afraid to show the ambivalences behind her fearless crusading persona. When she recounts going to a mother-and-baby home in the 1980s with a female teenage friend who wanted to give birth there, rather than face the wrath of her father. “At the time we didn’t see it [the home] as terrible, we saw it as a saviour,” Panti recalls. “I have complex feelings about this.” It’s a bracingly honest insight. The past, like the present, is rarely as simple as it might first seem.

Radio Moment of the Week: In arm’s way

On Tuesday, Jenny Greene (2FM, weekdays) speaks to singer-songwriter Sorcha Richardson, in advance of Songs from an Empty Room, a multi-media broadcast of concerts across the country. Encouraged by the ever-enthusiastic Greene, Richardson talks about the negative impact of the pandemic on her livelihood as a performer, such as cancelled tours. Things take an unexpected turn when Greene asks if her guest started any new pastimes during lockdown. “I started cycling again, then three days later, then I fell off it and broke my arm,” comes the reply. Moreover, one of Richardson’s band also had a bike accident a few weeks later, breaking her arm in the identical spot. One assumes the next time Richardson takes the stage people won’t wish her to break a leg.