From Golly Bars to Eskimo Mints: The Irish brands with a race problem

US firms are ditching racist branding. But Ireland has had its share of offensive products 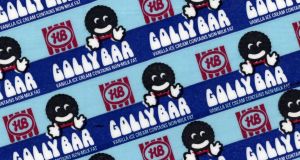 HB’s Golly Bar was renamed the Giant Bar, and given new packaging, in 1992

If proof were needed that systemic racism hides in plain sight, it’s right there on our supermarket shelves.

Mars is removing the image of a black farmer from its Uncle Ben’s products, and has said it will review the name. The character is out of step with the times, it admitted this week. “Now is the right time to evolve the Uncle Ben’s brand, including its visual brand identity.”

The Uncle Ben’s repackaging is part of a wave of corporations taking stock of their brand identities, amid a global moment of reckoning on racial inequality.

Another US company, Quaker Foods, which is owned by PepsiCo, said it would rebrand its Aunt Jemima pancake syrup – which is not sold in Ireland – because it was “based on a racial stereotype”. The Aunt Jemima character is an African-American woman originally based on a minstrel-show performer.

It’s not only much-loved US brands that have promoted racist tropes or problematic imagery. Here’s looking at you, Lyons Tea, HB’s Golly Bar ice cream and Robertson’s jam, which abandoned its golliwog logo only in 2001. All have been prominent in Irish shops and in Irish advertising.

The jaunty, and deeply offensive, dancing minstrels may have been excised from Lyons Tea’s ads and packaging after Unilever bought the brand, in the 1990s, but they’re still on its website. “The iconic ‘Minstrels’ and the very popular car giveaway were part of the brand’s advertising campaigns during the 1970’s,” the website declares without so much as a footnote about the problems associated with the “iconic” little chaps. Unilever’s UK website also makes unqualified and unapologetic reference to the “iconic” minstrels campaign.

Here’s a quick refresher for you, Unilever: minstrel shows date back to the character of Jim Crow, which was created by the white performer Thomas Rice in 1828. The trope gave birth to a crude stereotype that lodged itself in popular culture, where it remained for at least the next 150 years, its manifestations famously including the two-decade run of the BBC’s Black and White Minstrel Show.

The BBC series was axed in 1978 – four years before RTÉ broadcast Twink doing a skit in blackface, performing as “Gladys Day and the Pits” on The Live Mike. That gem was removed from the station’s archives in the past week.

No discussion of offensive brands is completely without mention of Trebor Blackjack sweets, which sported a golliwog on the wrapper until the 1980s, or the proudly Irish HB Golly Bars. Launched in 1957 and sold right until the 1990s, Golly Bars were made all the odder by the fact that the ice cream inside the wrapper was a rectangle of plain vanilla, around which some genius in the marketing department decided to stick racist wrapping. The packaging was adjusted in 1992 to remove the offending image, and the name was changed later to Giant Bars.

As brands start to more carefully audit the origins of their logos and packaging, there have been calls in the US for Chiquita bananas to reconsider its trademark stereotypical Latin American woman with a basket of fruit on her head, and for Colgate to withdraw Darlie toothpaste, which is only sold in Asia. Its original name was Darkie, and the Chinese name still translates to “black person toothpaste”.

The New York Times last week also drew attention to Cadbury’s Eskimo brand marshmallows, which are sold in Australia and New Zealand, and have been the subject of complaints by Canadian Inuit people. Presumably, the Inuit people haven’t yet been made aware of the existence of Oatfield Eskimo Mints – originally manufactured at the Oatfield plant, in Co Donegal, which closed in 2012, and now made in Britain. The staple of the office reception-desk mint bowl features a caricature of a laughing Inuit person on the packaging.

Are these all just thoughtless, outdated and clunky mishaps of branding, or evidence of something more toxic and intentional? The answer is probably a bit of both. Amid the growing clamour against systemic racism, it is increasingly hard not to recognise them as part of a culture of wilful blindness. “It’s tradition” just doesn’t cut it as an excuse any more. If logos really are just harmless expressions of a company’s origins, and nothing to do with their current values, what’s the point of the thriving brand-identity industry?

Racist brands need to go – but peeling the labels off is not enough. Change has to go deeper than packaging.

Arguably, the organisations with the most serious race problems today are the tech giants that make a big show of corporate-diversity initiatives but refuse to take meaningful action on racist hate speech.

Twitter finally taking a stand by not allowing Donald Trump to glorify violence unchallenged is not nearly as helpful as permanently blocking the neo-Nazis on its platform would be. Meanwhile, Facebook employees staged a virtual walkout earlier this month in protest at the company’s inaction on those same Trump posts. Mark Zuckerberg frequently cites his support for free speech as an excuse for inaction on hate speech, including by the US president, but in this climate the excuses are wearing increasingly thin.

Of course, it’s not just big corporations that are guilty of turning a blind eye to racist rhetoric or symbolism. It’s five years since eBay and Amazon banned sales of the Confederate flag, which is associated with support for slavery and racism in the United States.

Yet Cork GAA fans still, inexplicably, bring it to games, despite having been warned against it since 2017. Just this week the Cork GAA chairperson Tracey Kennedy told The Irish Times that stewards would confiscate any flags brought to the grounds. “As far as I’m concerned, the Confederate flag is banned.”