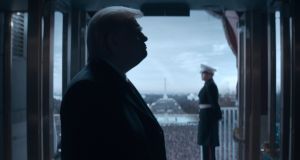 The US cable network Showtime has unveiled the first look at Brendan Gleeson and Jeff Daniels as President Donald Trump and the former FBI director James Comey.

Its new dramatisation of the pair’s clash over Russian interference in the US elections of 2016 will air this year – but not until after Americans have voted.

Showtime says that The Comey Rule, which it describes as “an immersive, behind-the-headlines account of the historically turbulent events surrounding the 2016 presidential election and its aftermath”, will be broadcast in late November.

Trump is running for a second term in the White House in a November 3rd election. Showtime has no comment on the timing of the broadcast.

The two-part TV series is based on Comey’s bestselling book A Higher Loyalty and more than a year of additional interviews, Showtime says. The network adds that The Comey Rule is not a biopic but “the story of two powerful figures... whose strikingly different personalities, ethics and loyalties put them on a collision course.”

Part one of the TV series will focus on the earliest days of the Russia probe and the FBI’s investigation into former secretary of state Hillary Clinton’s emails. Part two is a virtual day-by-day account of the relationship between Comey and Trump and the first months of the Trump presidency.

Many other key players in the investigation will be featured in the series, including the former acting attorney general Sally Yates (played by Holly Hunter), the former FBI director Andrew McCabe (Michael Kelly) and former president Barack Obama (Kinsgley Ben-Adir). – Reuters