In The Luminaries, Hewson is fantastic as a Dubliner in 1860s New Zealand 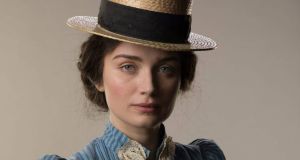 Hewson is grounded and there’s real heft to her performance. The Luminaries could very well turn her into a star

Eve Hewson is a wonderful actress but goodness she picks strange projects. Hewson – it is for the time being necessary to point out that she is the second child of Bono and Ali Hewson – was launched upon the screen via Steven Soderbergh’s ghoulish hospital drama The Knick. It was cruel and grim – a slowburn horror movie disguised as prestige TV.

The Luminaries (BBC One, Sunday), adapted from Eleanor Catton’s 2013 Booker-winning historical epic of the same name, is even weirder. Which is saying something considering The Knick ended with a doctor conducting experimental surgery on his own brain.

What would it feel like to have someone conduct experimental surgery on your brain? A bit like sitting through the first episode of The Luminaries, I would imagine: confusing, grim and with many deathly dull interludes. Your vision might well turn bleary, too. This is an effect The Luminaries replicates by having key scenes take place in a void of inky blackness so that it is impossible to work out what is happening.

Hewson is fantastic as Anna Wetherell, a Dubliner (I think) newly arrived on New Zealand’s South Island during the country’s Goldrush of the 1860s. So it’s a shame Catton, adapting her own novel, doesn’t give the plucky lead a great deal to do beyond looking baffled and upset (you will soon empathise).

There has been a murder – though, because so much of The Luminaries occurs after sundown, it’s hard to work out who has been killed, or even that someone has died in the first place. Still, it eventually transpires that Anna, a sex worker and opium user, is the chief suspect and so has been thrown in the clink.

Her back story, such as it is, is filled in via flashbacks and the first of six instalments pings bewilderingly between the two timelines. The earlier chronicles the illiterate Wetherell’s arrival in Dunedin, when she falls into the orbit of creepy fortune teller Lydia Wells (Eva Green).

Wells is installed at the House of Many Wishes – a sort of mash-up of Twin Peaks’ Red Room and one of those tented tea-houses from the Body and Soul area at Electric Picnic. And she is plainly up to no good.

Nonetheless, she persuades Anna to move in without the Irishwoman pausing to question her new friend’s motives. So much for Anna’s supposed street-wise streak, which The Luminaries has worked so hard to establish.

There’s a love interest (Himesh Patel, from Richard Curtis’s Yesterday). He and Wetherell flirt en route to Dunedin. Thereafter they appear fated to pass like creaking ships in the night (given the lack of illumination, they probably wouldn’t notice each other anyway).

The Luminaries is a joint production between the BBC and TV NZ, New Zealand’s state television service. Apparently the mighty New Zealand television industry was capable of something at which RTÉ failed with Normal People: partnering with a bigger broadcaster to share its living culture with the wider world. Normal People was of course, and by contrast, commissioned in London, by the BBC.

New Zealand’s wild frontier days are wonderfully evoked and the scenery is of course gorgeous. The racism of the era is acknowledged with Chinese and Maori characters treated as subhuman. But the constant time jumps are disconcerting. As is the dreamy dialogue, which has a poetic lustre without ever threatening to make sense.

Hewson is grounded and there’s real heft to her performance. The Luminaries could very well turn her into a star. Yet there’s little else to be said for a drama adrift in a fog of portentousness and seemingly content to leave the viewer flailing in shadows.

‘This is such a terrible mess. But I feel the power of what we do more vividly than ever’
6