Election 2020: Having long resisted her participation, RTÉ should be happy with its decision 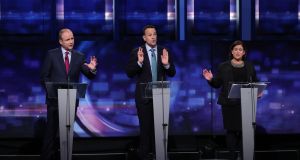 Tuesday night debate club at RTÉ television centre, the RTÉ election colour wheel had returned to every shiny surface and a trio of political hopefuls had claimed a Perspex lectern each. But what was that noise?

The programme began with a noticeable whirring in the studio – the sound of the party spin machines on full pelt, perhaps, or maybe the developers next door had awkwardly chosen that precise moment to start building apartments on the land RTÉ flogged back in 2017.

This Prime Time Leaders’ Debate, aka the fourth instalment in the Election 2020 debate franchise, was originally meant to be a simple head-to-head between Spiderman and the X Men’s Magneto – the superheroes Micheál Martin and Leo Varadkar told RTÉ children’s show News2Day they would most like to be – but neither had reckoned on the last-minute casting of aspiring Wonder Woman Mary Lou McDonald.

“The lads have had a good run at it, David,” as the Sinn Féin leader said at one point, wielding her imaginary Lasso of Truth.

Inviting McDonald to take part was not only the correct decision for election fairness, it was the making of this television spectacle. If RTÉ had polished its floor purely for Varadkar versus Martin, it would effectively have been repeating a programme originally broadcast on Virgin Media One two weeks ago, and that one had Pat Kenny on a set decorated by lightsabres.

Television thrives on novelty, and this line-up was the best opportunity for a showdown that never quite happened, but threatened to on several occasions. RTÉ, having resisted McDonald’s inclusion until Monday, should be happy overall with how it unfolded.

Five days after Virgin’s “blood sport” experiment with Matt-and-Ivan (or should that be Ivan-and-Matt?), and eight days after Claire Byrne’s Galway seven-way, Miriam O’Callaghan and David McCullagh finally got their go at this moderating lark, and they were straight down to business from their pair of butterscotch leather chairs, the kind you imagine Charlie Haughey would have fancied once.

Three things immediately became clear: McCullagh had snagged the RTÉ iPad for the night (meaning he could have a quick scan of Twitter if things got properly dull); Varadkar’s tie looked like it was pixellating; and that noise, pesky though it was, had the potential to be a merciful distraction from the actual words being spoken, a good 67 per cent of which involved itemising the various types of “change”.

Back when its leader was still being excluded from it, Sinn Féin had dubbed the prospect of this debate an “utter joke”. In the event, it was appropriately devoid of jokes, although Varadkar seemed amazingly tickled when Martin dropped his notes in the middle of his valiant defence of Fianna Fáil’s healthcare record and took pleasure in picking them up for him.

The Taoiseach also indulged in a smirk when McCullagh suggested to McDonald that she was “encouraging people to procreate” to fix the pensions time bomb through demographics alone.

Positioned a safe ocean away from the three leaders, the Prime Time duo deployed their special weapons: O’Callaghan makes politicians sound like they’re purposefully prevaricating (which they usually are), consummate eye-roller McCullagh makes them sound silly and unprepared.

But they were essentially both reasonable cops on the night, thorough and dogged in their interrogation without being impatient, unfair or obtrusively tetchy as the debate ticked its way through housing, homelessness, healthcare, climate change and other miserable topics.

After the first commercial break, whoever it was who left the engine running on their car had raced out to switch it off. Indeed, there was pin-drop silence in the studio during O’Callaghan’s exchange with McDonald about comments made by Sinn Féin’s Conor Murphy, finance minister in the North, about the murder of Paul Quinn.

McDonald’s difficult pause before answering was the moment viewers might have concluded she would have been better off just sitting on her party’s poll lead, watching this debate from the martyred sidelines and letting the two men snipe tediously all the way to Saturday.

There was the inevitable discussion about possible coalition combinations, which unsurprisingly went nowhere given the parties likely to enjoy the honour of being the much-castigated junior partner in any future government weren’t in the house this time.

Then the last question was a bit of a job interview special: tell us about a (political) mistake you made. It allowed all three candidates to finish on a vaguely competent note before handshakes were exchanged and the studio hoovering could resume.

For true broadcasters’ glee, see Sunday’s coverage of the count.