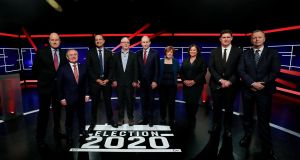 Before it even started, the Leaders’ Debate (Virgin Media One, Thursday) was suffering an identity crisis: it couldn’t decide whether it wanted to be Love Island or Fight Club.

Throughout the preview discussion show that preceded the main event, presenter Gavan Reilly repeatedly compared the debate to the amorous reality show, which is uncoincidentally aired on the channel.

But when Reilly spoke to debate moderators Matt Cooper and Ivan Yates before proceedings kicked off, the Love Island references promptly disappeared. Far from wanting to be loved up, Cooper said, “We’re looking for people to be punched up”.

Yates continued the macho theme, proclaiming “Politics is a blood sport, and we love it.”

When the debate finally began, however, it became clear what show it really wanted to be: The Weakest Link. With its pointedly rude hosts, its ominous arc of podiums and its dramatically dark backdrop illuminated by random lines, the set resembled a knock-off of the television game show where contestants pick off the weakest of their number, Lord of the Flies-style.

As such, it was an apposite setting for a gathering where the likes of Taoiseach Leo Varadkar, Fíanna Fáil leader Micheál Martin and Sinn Féin leader Mary Lou McDonald had to decide whether to play footsie or turn on each other. Certainly, there was none of the “questions from the audience” malarky that marked RTÉ’s debate between the seven parties.

The opening segment, about the parties’ spending plans, was frenetic and bad-tempered, and that was just Yates and Cooper. Surveying the seven political leaders standing at the lecterns – a line-up which also included Eamon Ryan of the Green Party, Brendan Howlin of the Labour Party, Mick Barry of Solidarity-People Before Profit and Catherine Murphy of the Social Democrats – Yates opened the debate by describing them as a “bunch of charlatans and chancers” and characterising their spending plans as “dishonest”.

On this showing, moderator was a misnomer for Yates’s role – he was more like a drill sergeant hazing new recruits. The Taoiseach tried to appear unfazed by this salvo. “It’s a pleasure to be here,” he said, unconvincingly.

Cooper, meanwhile, played the bad cop to his co-presenter’s worse cop, cutting across Martin’s opening statement to the point that the Fíanna Fáil leader complained about being interrupted. Martin would make similar complaints regularly throughout the evening, in contrast to his rivals: he may have wished to project authority and maturity, but it also made him seem slightly prickly.

But Martin had a point, at least when it came to the moderators. Yates, in particular, harangued the leaders to the point that one started to feel a modicum of sympathy for the politicians, an unusual sensation at the best times, never mind when they’re pitching for votes.

The testosterone levels were so high that it was no surprise that the normally formidable Murphy sounded somewhat unsure during her first contributions; McDonald, by contrast, was conspicuously uncowed.

When the debate turned to the big issues of housing and health, however, the atmosphere calmed down unexpectedly. Yates and Cooper allowed the leaders more time to answer, which in turn allowed the politicians to start needling each other in earnest.

Varadkar and Martin had their first real clash over housing, McDonald was robust in her criticisms of the Taoiseach’s government and, of course, there was occasional low-level sniping between the various left pols. But as was obvious from the moment McDonald asked “if the leader of Fíanna Fáil could demonstrate some courtesy”, the real grudge match was between Martin and the Sinn Féin leader. Things got particularly testy when the question of a Border poll arose.

As if to underline the acrimony between the pair, McDonald uttered such normally unimaginable phrases as “in fairness to Leo Varadkar” and “Leo is right”.

The Taoiseach, however, rejected the possibility of coalition with Sinn Féin as firmly as Martin did, prompting Cooper to finally go all Love Island. “Neither of these lads want you, are you going to continue making eyes at them?” he asked McDonald, just a tad leeringly.

Though the debate settled down, the format was too unwieldy and the interaction too fractious for anyone to really sell their manifestos, much less lay down cogent policy ideas. More to the point, no-one really landed a knockout punch. By the same token, there were no obvious losers, with no-one committing any howlers.

Howlin made his points well without being rattled, Murphy hit her stride on the issue of housing, Barry mixed everyday anecdote with macroeconomic figures and Ryan, after a subdued start, unsurprisingly found his voice with stirring statements on climate change and environmental action. McDonald was less on the front foot than expected, but was steady and dignified, while Martin cut an articulate and composed figure, in a headmasterly fashion.

If anyone was the weakest link, it was the Taoiseach. He acquitted himself adequately, albeit with a greater tendency to talk over others, but given the polls suggesting Fine Gael urgently need to rally their voters, he needed to do more.

As for Cooper and Yates, they can be reasonably happy with the night’s work. Yates, especially, fared better as the debate went on, firing off sly asides like his response when Martin claimed to share Ryan’s “passion” for green issues: “Coincidence,” Yates remarked drily.

After their OTT start, the two presenters oversaw a debate with just enough zing to keep viewers engaged, if not necessarily much more enlightened. But then, like it or not, the latter quality matters less than ever these days, when those voters who haven’t made up their mind at this stage of the campaign are as likely to be swayed by a five second meme on social media as a 90 minute television debate.

Maybe the game show approach isn’t such a bad idea after all.

There'll be no Bauhaus in this White House
7