Guilty Feminist, Gay and a NonGay, 2 Johnnies, It Galz, Blindboy, My Favorite Murder 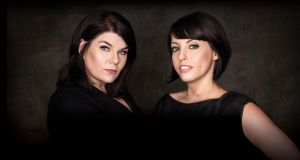 The line-up for this year’s Dublin Podcast Festival includes The Guilty Feminist, A Gay and a NonGay, The 2 Johnnies, It Galz and Blindboy.

They are among the first batch of events announced for the November festival, which will feature international and Irish podcasters hosting comedy, crime, literature and history shows and live podcasts at venues around the city.

With more than 35 million downloads under her belt, Deborah Frances-White returns to Dublin with the Guilty Feminist podcast (Vicar Street, November 6th) to talk about 21st-century feminist goals and the paradoxes and insecurities that undermine them.

The Tipperary comedy duo the 2 Johnnies – aka Johnny Smacks and Johnny B, who have topped the podcast charts for 80 weeks – are at Vicar Street on November 14th with a live show full of “riding, Gaelic games and parish news”.

The It Galz’ live show of cultural commentary (Vicar Street, November 16th) sees Jenny Claffey and Lindsay Hamilton share their takes on topics from pop culture to women’s lives through their comic and sometimes satirical lens.

The Dollop, one of the top 20 downloaded comedy podcasts in the United States, Canada and Australia, features the history buff Dave Anthony reading a weird and disturbing story from the past to his friend Gareth Reynolds, who has no idea what the tale is going to be about (Liberty Hall, November 21st).

For My Favorite Murder’s live show (Bord Gáis Energy Theatre, November 24th and 25th), the comedian and TV writer Karen Kilgariff and the writer and Cooking Channel host Georgia Hardstark present a true-crime podcast that debuted at number one on the New York Times bestseller list.

Tickets for Dublin Podcast Festival go on sale on Monday, August 12th, at 10am; ticketmaster.ie, #DPF19