Drivetime now has the zippiest news coverage on Irish radio 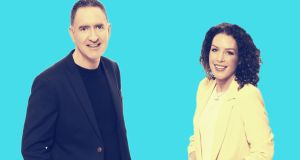 It’s a mostly disappointing week for anyone counting on blizzard conditions for distraction and amusement, not to mention nostalgia for those innocent times during the Beast from the East when, back in 2018, being stuck at home for four days seemed like an eternity.

But if the snow doesn’t quite materialise in full winter-wonderland quantities, until later in the week anyway, the precipitation anticipation teaches us something, courtesy of Morning Ireland (RTÉ Radio 1, weekdays). On Tuesday its presenter Rachael English tackles the question that has gripped the nation since, oh, Sunday: what do you call that stuff that’s “not quite snow, not quite hail”?

3 Maternity leave during lockdown has its advantages

8 Kathy Sheridan: The online threat to the integrity of Irish elections lies within

9 Fintan O’Toole: Prince Philip - asylum-seeker and citizen of nowhere, but rich and white

12 How supermarkets trick us into buying unhealthy food, and what we can do about it

13 What is unionism without the union? The question has us spooked

16 Watt may seek to rein in Holohan

17 Berlin’s vanishing nightclubs: ‘The open sex in all corners can be distracting’

18 At home with Hilary Weston

20 Lena Dunham: ‘There’s so much judgment around bigger bodies, like bigger women are stupider’

22 Michael J Fox: ‘In the wheelchair, I’m luggage. No one listens to luggage’

24 On the centenary of Northern Ireland’s birth, let’s imagine a potential rebirth of Ireland

26 Ken Early: It’s time for Alexander-Arnold to move to the middle

27 The chickpea stew that broke the internet in the US is here. Give it a go

28 Harry and Meghan: The union of two great houses, the Windsors and the Celebrities, is complete

30 ‘Fame? If you have any personal demons, you’re quite not prepared for it’

31 Cartoon Saloon boosted by deals with Apple and Netflix

32 Optical refinements at the Parthenon

38 My Bloody Valentine: Very loud, very fuzzy, and heading back to their Irish studio

39 It’s as if censorship were back: Why Ireland can’t watch Wild Mountain Thyme this month