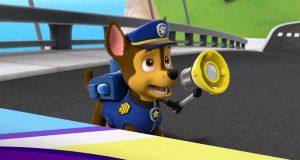 It was only a matter of time before the protests came for Paw Patrol.

The American children’s cartoon about a squad of canine helpers is basically a pretence for placing household pets in a variety of cool trucks. The team includes Marshall, a firefighting Dalmatian; Rubble, a bulldog construction worker; and Chase, a German shepherd who is also a cop. In the world of Paw Patrol, Chase is drawn to be a very good boy who barks stuff like “Chase is on the case!” and “All in a police pup’s day!” as he rescues kittens in his tricked-out SUV.

But when the show’s official Twitter account put out a bland call for “Black voices to be heard” recently, commenters came after Chase. “Euthanize the police dog,” they said. “Defund the paw patrol.” “All dogs go to heaven, except the class traitors in the Paw Patrol.”

If you – as I have – worked on a TV show or movie in which police are portrayed as lovable goofballs, you have contributed to the larger acceptance that cops are implicitly the good guys

It’s a joke, but it’s also not. As US protests against racist police violence continue, the charges are mounting against fictional cops, too. Even big-hearted cartoon police dogs – or maybe especially big-hearted cartoon police dogs – are on notice. The effort to publicise police brutality also means banishing the good-cop archetype, which reigns on both television and in viral videos of the protests themselves. Paw Patrol seems harmless enough, and that’s the point: the movement rests on understanding that cops do plenty of harm.

The protests arrived in the midst of a pandemic that has alienated Americans from their social ties, family lives and workplaces. New and intense relationships with content have filled the gap, and now our quarantine consumptions are being reviewed with an urgently political eye. The reckoning has come for newspapers, food magazines, Bravo reality shows and police procedurals.

Last week Tom Scharpling, an executive producer of Monk, criticised his own show on Twitter: “If you – as I have – worked on a TV show or movie in which police are portrayed as lovable goofballs, you have contributed to the larger acceptance that cops are implicitly the good guys.” Griffin Newman, an actor who appeared in two episodes of Blue Bloods as a detective, donated his $11,000, or about €9,500, in earnings to a bail fund, inspiring other actors who have played cops to do the same. Lego has halted marketing on its Lego City Police Station and Police Highway Arrest sets. The A&E channel has pulled its reality show Live PD from the schedule. On Tuesday night, Cops, the show that branded suspects as “bad boys” and spawned the whole genre of crime reality television, was cancelled after 32 seasons.

Cops are not just television stars; they are American television’s biggest stars. Crime shows are US TV’s most popular genre, now making up more than 60 per cent of prime-time drama programming on the big four broadcast networks. The tropes of the genre are so predictable that a whole workplace sitcom, Brooklyn Nine-Nine, is layered atop them. “A police station was a shortcut,” Dan Goor, the show’s cocreator, has said, “because people are very aware of how police television works. You know instantly who the good guys are and who the bad guys are.”

On television, the hero itself is a concept under review. Just a few years ago, at the height of the antihero craze, a prestige drama could seem a little fluffy if its protagonist was not an actual murderer. There is an artistic justification for humanising bad people and complicating good ones. It’s hard to argue that a show like Watchmen, in which a black policewoman brutally beats suspected white supremacist terrorists, or Unbelievable, in which two women detectives repeatedly collar the wrong guys, would make for better television if their star cops acted more like German shepherd puppies.

After Inkoo Kang, a critic for the Hollywood Reporter, described The Wire as painting police with a “heroic gloss”, Wendell Pierce, who played Det Bunk Moreland on the show, pushed back. “How can anyone watch The Wire and the dysfunction of the police & the war on drugs and say that we were depicted as heroic,” he tweeted. “We demonstrated moral ambiguities and the pathology that leads to the abuses.”

The more salient critique of the crime genre is not how it depicts the police but just how obsessively it privileges their ambiguities and pathologies over all other players in the criminal-justice system — namely, the people cops target as suspects. “As TV viewers we are locked inside a police perspective,” Kathryn VanArendonk wrote recently on Vulture. Color of Change notes that defense attorneys, like Perry Mason and Matlock, “once embodied the character of the American hero”, defending the American people “against the many police officers, prosecutors and judges who jumped to conclusions too quickly and stood as symbols of a deeply flawed system”.

Cops already rank among the most humanised groups in the United States. The same cannot be said for the black Americans who live in fear of them

But a sea change led by Dick Wolf’s mammoth Law & Order franchise has realigned the crime genre under the perspective of prosecutors and cops. “Our sympathies have generally been with victims,” Warren Leight, the showrunner of Law & Order: SVU, said last week on the Hollywood Reporter podcast TV’s Top 5, in a conversation about rethinking the show. He added: “Cops behaving illegally, that’s not part of Dick’s brand.”

The good-cop trope is a standard of both police procedurals and real-life police tactics, and now crowdsourced video of the protests has given cops a new stage for performing the role. In recent days, supposedly uplifting images of the police have spread wildly across the internet, competing for views with evidence of cops beating, gassing and arresting protesters. In Houston an officer consoled a young black girl at a rally: “We’re here to protect you, okay?” he told her, enveloping her in a hug. “You can protest, you can party, you can do whatever you want. Just don’t break nothing.” In Nashville, the police tweeted a photo of cops kneeling next to a black boy with a Black Lives Matter sign, smiling from behind their riot helmets. And in Atlanta, a line of National Guard soldiers did the Macarena. On the final rump shake, a black rifle slung over one soldier’s back swung to the beat.

These images show cops engaging in a kind of pantomime of protest, mimicking the gestures of the demonstrators until their messages are diluted beyond recognition. They reframe protests against racist police violence into a bland, nonspecific goal of solidarity. These moments are meant to represent the shared humanity between officers and protesters, but cops already rank among the most humanised groups in the United States; the same cannot be said for the black Americans who live in fear of them. Cops can dance, they can hug, they can kneel on the ground, but their individual acts of kindness can no longer obscure the violence of a system. The good-cop act is wearing thin. – New York Times