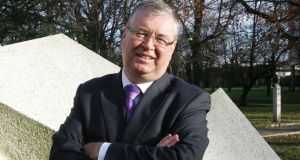 Technical difficulties left Joe Duffy with no one to talk to. Photograph: Alan Betson

Perplexed LiveLine listeners took to Twitter this afternoon to poke fun at the show’s misfortune after a phone line malfunction caused producers to play music tracks for the last hour.

All had been going well for Joe and co for the first 15 minutes of the hour-and-a-quarter long show, but disaster struck at around 2pm when the lines inexplicably went silent, forcing RTÉ to replace the talk section with close to an hour of songs.

Out of his normal comfort zone, normal presenter Joe Duffy had to take a back seat and spin some records, even receiving widespread praise for an eclectic array of tunes including tracks from The Corrs, Elvis Presley and young Derry soloist Soak.

From an initial response of confusion and bemusement, the show’s social media followers soon sought to take advantage of the unusual circumstances, and requests for particular tunes came raining in for the rest of the afternoon.

My goodness. The entire #Liveline show was #redacted today. Joe pressed an emergency alert button. It played the Corrs. Code Red is Westlife

Tony O’Brien commented: “@LiveLine_RTE is banjaxed when the phone lines are down. Joe has had to resort to playing The Corrs!!!”, whereas Gary Honer saw the funny side of things.

“Producers are now frantically running around the @rte canteen looking for people to Talk to Joe !!”

Labour councillor for Dun Laoghaire-Rathdown County Council Peter O’Brien added: “@Liveline_RTE belting out the tunes!!” while other users reserved praise for the RTÉ 1 continuity announcer’s consummate professionalism as she took the reins towards the end.

Apologies were issued from both the RTÉ Radio 1 Twitter account and Liveline’s own profile, and Joe Duffy has assured his listeners that the popular talk show will be back tomorrow “come hell or high water”.

Offering his own perspective, follow-up presenter Ray D’Arcy described a scene of people running around RTÉ “like headless chickens”, christening June 9th as “the day the phone lines died” before commending his colleague for an “unflappable” response to the amusing crisis.